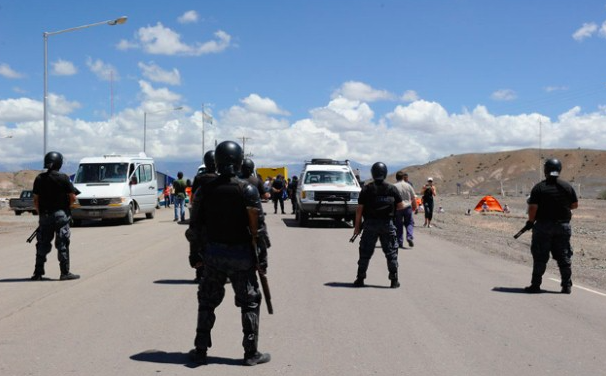 ​Tudcum San Juan, Argentina. October 23, 2015. One person was admitted into a hospital with a fractured skull and another with a broken arm, following brutal police repression against peaceful protesters demanding information about contamination at Barrick Gold’s Veladero mine near Tudcum Argentina.

Less than one week after Argentine police brutally repressed a peaceful crowd in La Rioja Argentina as they expressed their opposition to a new mining venture in the central Argentine province, police attacked again, this time hospitalizing 2 and injuring other peaceful protesters that were claiming information regarding Barrick Gold’s recent cyanide laced leachate spill at its Veladero mine.
​Veladero is Barrick Gold’s largest project in Argentina, and was recently in the news following a massive cyanide-laced spill that occurred near Barrick’s leachate valley, due to failed environmental management systems.
Immediately after the spill, workers at Veladero, fearing freshwater contamination for downstream communities (including to their own families) started to send twitter messages alerting the public to the spill warning people not to drink water from tap.  Barrick Gold downplayed the spill indicating that it was not a risk to the local water supply, and that only 15,000 liters of cyanide laced effluent were released into the environment. However, following local government intervention in the accident, and an official warning to residents that they should buy bottled water, just in case, Barrick admitted that the spill was actually to the tune of 250,000 liters, and finally conceded that well over 1.2 million liters of cyanide contaminated leach had compromised the local environment.
The head of San Juan’s Mining Police, Marcelo Ghiglione admitted to a local news source that San Juan’s Rio Las Taguas, a key water lifeline into some of San Juan’s richest agricultural lands, had been compromised. Barrick denied that any waterways had been contaminated. However, neither Barrick Gold nor the Argentine government has provided information regarding the spill, enraging communities, while a university study of the water downstream from the spill indicates high levels of contamination.

Police forces waited until the early morning hours brutally attacking local residents at 4:30 am this morning arresting 23. As of this press release, all 23 detained were still in custody. The two most injured were taken to local hospitals.