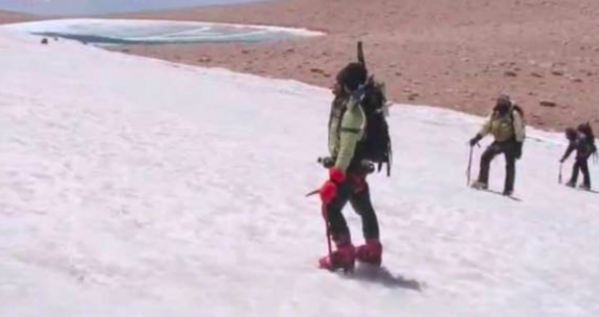 Through a quietly released official announcement, the Federal Environment Secretary of Argentina, Sergio Bergman, informed that Argentina’s National Glacier Inventory has just completed a glacier count in the controversial Famatina Mountains, and that the National Glacier Institute (the IANIGLA) recognizes the presence of glaciers and rock glaciers, as well as periglacial environment (permafrost), all protected by federal and provincial law. This is in the very area where two Canadian mining companies (Barrick Gold and Osisko) had unsuccessfully attempted to develop the Famatina Gold Mining Project.

The IANIGLA glacier inventory report, which is an inventory in progress, recently completed its study of the Famatina glaciers, indicating that 46 protected ice bodies are located in the mountain range. The inventory registered 1.82 km2 of uncovered (visible) glacier ice as well as 0.61km2 of subsurface rock glacier ice (ice beneath the surface with a thin rock cover considered part of the periglacial environment). Argentina’s federal glacier protection law established a clear prohibition of mining activity (exploration and extraction) in glacier and periglacial areas.

“This is an important moment for glacier protection and cryoactivism —the protection of our frozen environment” says, Jorge Daniel Taillant, Director of the Florida-based Center for Human Rights and Environment (CHRE), an NGO originally based in Argentina, but that had to leave following sustained political persecution when they began intervening in mining operations affecting glaciers. CHRE, and their founder, human rights and environmental advocate Romina Picolotti, had a heavy hand in getting the world’s first Glacier Protection Law passed in Argentina that prohibits mining. “We should remember”, says Taillant, “that La Rioja’s governor, Beder Herrera, stated publicly that there were no glaciers in La Rioja, and that their Environment Secretary, incredibly said that it didn’t even snow in the Famatina Mountains. They were defending the mining interests of companies like Barrick Gold and Osisko that were trying to move into gold mining in the area. ” Taillant is the author of La Rioja Province’s first glacier inventory (unofficial) which he carried out in 2012 finding more than 400 glaciers in the province, and 39 in the Famatina range.

The IANIGLA team found 46 ice bodies protected by law in the Famatina Mountains, including uncovered visible glacier ice as well as sub-surface rock glaciers of the periglacial environment (permafrost). Local communities and environmental NGOs have been claiming that mining should not advance in the Famatina range because of glacier and periglacial resources, and this report by an official national authority, confirms their claims. Glaciers and periglacial areas provide water resource storage as well as regulate water flow into local rivers during dry and hot months, when water is scarce. Slow melting ice from these resources provide a steady flow of critical water supply.  This is why Argentina’s National Glacier Law protects these resources.

In 2012, CHRE published a report entitled Glaciers and Mining in La Rioja Province. This was in response to the absurd statements by the La Rioja governor, that insisted there were no glaciers in the province. The Environment Minister of the province, Nito Brizuela, stated he didn’t think the province had any glaciers, and in fact, even doubted that the province’s largest glacier, the El Potro Glacier on the border with Chile, was even glacier ice. It later turned out that one of the province’s planned mining projects was under the glacier. Ironically, and chillingly, the mining project is called “El Potro”.

CHRE had registered 39 perennial ice bodies protected by law in 2012. The IANIGLA now registers 46. According to the IANIGLA, the glacier ice (both uncovered and subsurface) are located above 4,000m. “The area studied”, says the IANIGLA report, “is on the East side of the Famatina Mountains, with peaks of 5,254m, 5,791m, and 6,097m. Hydrologically, this contributes to the rio Grande of La Rioja …   the General Manuel Belgrano Glacier (6,097m) is one of the largest bodies of ice.” CHRE published an interpretive guidelines recently to understand the IANIGLA glacier inventory for La Rioja. The link is below.

What the IANIGLA report doesn’t say, but that is clearly visible from its conclusions, is that the mining projects once on development horizons for La Rioja Province (like Famatina), are smack in the middle of terrains that are officially protected by federal and provincial law. CHRE’s report focused precisely on this issue, the conflict between mining and glaciers. “Projects like Famatina, which have been the target of companies like Barrick Gold and Osisko” are now off limits to mining,” says, CHRE Director, Jorge Daniel Taillant. (see image below)

CHRE Photo
4. Famatina Mining Project and the presence of glaciers