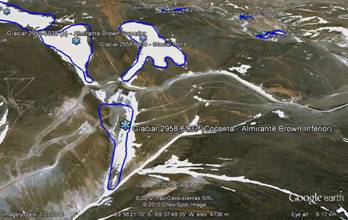 Barrick Gold, the company that had proposed dynamiting glaciers and hauling them off in dump trucks to enable it to access gold reserves at its Pascua Lama project, suffered a major setback today in the Argentine National Supreme Court. An injunction order originally granted to Barrick by a local federal circuit court judge suspending the recently approved National Glacier Act was terminally revoked. The glacier law is now back in full force for Barrick and other mining companies operating inArgentina.

Mining companies investing in exploration activities all along the Andes mountains were quietly awaiting the ruling by the Argentine Supreme Court, which issued an 8 page verdict today stating firmly that the glacier law holds and Barrick and a slew of other mining companies exploring for minerals in the high Andes mountains will now have to file glacier impact reports on their operations and adhere to the law. If they are found to be in glacier areas or impacting glaciers, according to the law, they will have to redesign their projects–or worse, pack their bags and go home. Barrick’sVeladero project and the not-yet-extracting Pascua Lama project (a binational project with Chile) both fall under the scope of the law and would have to produce glacier impact studies to continue operations.

The verdict, labeled Complainant: Barrick Gold Exploraciones Argentina, S.A. and others vs. the National Government, reversed a previous court order in 2011 from federal circuit court judge Galvez in San Juan province which favored the Canadian mining giant, stating that the National Glacier Act created a state of “uncertainty” and “lack of tranquility” for mining companies operating in glacier zones, where the national law states clearly that mining shall not impact glaciers or periglacial environments (permafrost). The problem for mining projects in provinces like San Juan or La Rioja is that much of the terrain above 4,000 meters is where the vast majority of new projects are searching for minerals in the high Andes mountains.

The earlier verdict granted to Barrick (a similar injunction request was granted to Xstrata Copper), which had effectively suspended the National Glacier Act for companies such as Barrick Gold (Pascua Lama and Veladero) and Xstrata Copper (El Pachón), was a great windfall for several hundred exploratory mining projects in the high Andes mountains. This not only includes San Juan province but also high altitude provinces such as La Rioja, Catamarca, Jujuy, Salta, and Mendoza, where glaciers and permafrost abound. The doubt remains, hence, what the strict ruling will mean for companies whose concessions are surrounded by or coincide with glaciers and more generally with frozen grounds (permafrost), which are also protected by the law. At first glance, these companies will have to prove they are not impacting glaciers or permafrost or risk being in regulatory trouble.

Many other mining companies such as NGEx Resources (Vicuña, Las Flechas, José Maria), McEwen Mining (Los Azules), Peregrine Metals (El Altar), Glencore (Aguilar), Malbex (Del Carmen), Anglo American (Cerro Verde), Osisko (Famatina) and many others, were betting that less stringent provincial glacier protection laws, which cover fewer types of glaciers and some of which do not protect permafrost zones, would prevail over the national law–which is the strictest of a dozen or so glaciers laws that have appeared in the last two years.

The Supreme Court verdict specifies that the National Glacier Law rightly and justly calls for a National Glacier Inventory to determine what areas should be protected by the law and where mining activity might be affecting glaciers and periglacial environments. The fear from the mining sector and from the provincial government, which has been betting on mining for developing its economy, is more than warranted. Recently the national glacier institute, the IANIGLA, revealed its first official inventory results for the Mendoza River, an uncontroversial area rich in glaciers but where no mining is planned. The IANIGLA came out loudly, indicating specifically that in the zones surrounding the more than 1,600 glaciers in the Mendoza River basin, mining is now prohibited. The official statement by the IANIGLA was a bucket of ice thrown at the mining sector, as it is a clear indicator confirming that the National Glacier Act will begin to set no-go zones for mining operations due to potential glacier and permafrost impacts.

The verdict also emphasizes the responsibility of mining companies to produce within 180 days of the passage of the National Glacier Act a detailed glacier impact study to determine if the glacier law applies to the project in question. This includes projects already under operation, making the National Glacier Act retroactive for projects such as Barrick’sVeladero gold mine.

link to the verdict:
https://center-hre.org/wp-content/uploads/2011/04/Fallo-Barrick-Revocación-de-cautelar.pdf (in Spanish only)

SIDE EVENT: RIO + 20 Glaciers and Sustainability in the Anthropocene
Conflicts Grow in Andean Region Around Mining Projects