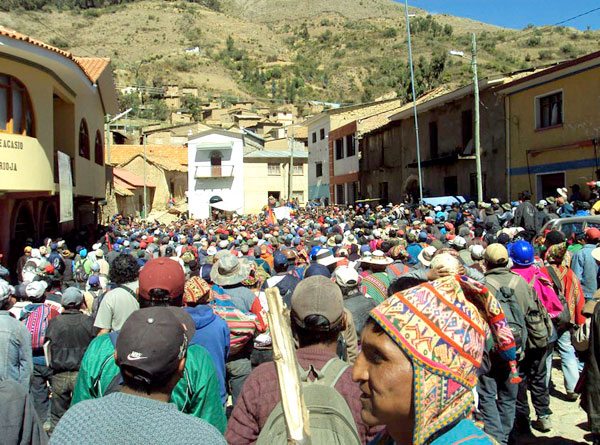 Tensions escalated to violence yesterday as farmers as well as policemen were injured. One peasant farmer was killed when government authorities sent 370 policemen to rescue the hostages, the first three of whom were captured on June 28th and the last two this Tuesday, July 3rd. The protestors, who are demanding the mining company leave their territory, are also calling for the release of indigenous leader Cancio Rojas, who is under house arrest for his involvement in earlier protests. Potosi Governor Felix Gonzalez says he will continue to pursue negotiations with the community to reach a solution to the confrontation.

The Mallku Khota project in Bolivia contains one of the world’s largest deposits of silver, indium and gallium and has been explored by the company since 2007. The region also contains smaller deposits of gold, which some indigenous people seek to explore themselves without the company’s interference.

Clashes between mining companies and the communities that lie between them and valuable ore deposits have been an increasing trend all around the Andean region in recent months. Just last month, Bolivian President Evo Morales exerted state control over operations of Glencore’s (LSE: GLEN) tin and zinc mine after weeks of protests led to clashes.

On the heels of an earlier state of emergency last December, Peru declared another this week in its Cajamarca region where three people have already been killed during protests against the expansion of US-based Newmont Mining’s (NYSE: NEM) Conga gold mine, already the largest in South America. A 30-day government-declared state of emergency in Espinar, a town in the Cusco region, recently came to a close after anti-mining protests against the Tintaya copper mine operated by Switzerland’s Xstrata (LSE: XTA.L) resulted in violent conflict that left at least 50 people injured, four dead, and the city mayor in prison. The conflict ensued after the community claimed water contamination from the mine was to blame for increases in sickness, death, and deformities in people and livestock.

Further south, in Argentina, community resistance has brought mining projects to a standstill in areas such as La Rioja province, toward the country’s Northwest, where Canadian company Osisko (TOR: OSK.TO) has halted exploration of its Famatina mine due to community protests. The town of Andalgalá, in Argentina’s northwestern Catamarca province, has prevented Xstrata from accessing its Agua Rica site – formerly owned by Yamana Gold (TOR: YRI.TO) – after a clash between police and opposition groups turned violent. Andalgalá is also situated nearby Xstrata’s Bajo la Alumbrera mine where about two dozen people were injured in February after police confronted protesters who were blocking the road from trucks carrying explosives to the mine site.

As protests and clashes with police forces gain media attention and some local governments show they are growing attune to community interests by halting progression of contested mining projects, another dimension is added to the plate of foreign mining companies seeking to extract the continent’s wealth of mineral resources. The players are all at the table now – communities are making their voices heard. Will foreign mining companies and mining-friendly governments pull up a chair?
For more information: