California Governor Doubles Down on Climate 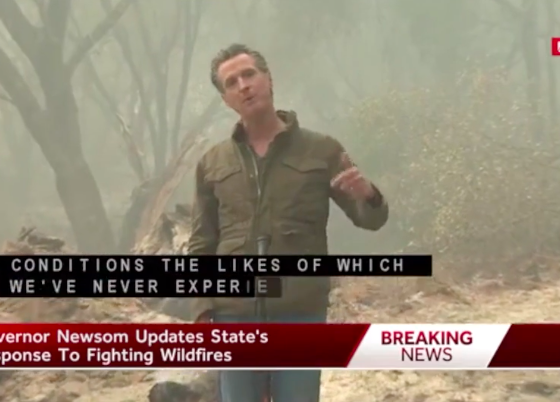 “We’re in the midst of a climate emergency,” Newsom said. “We’re experiencing what so many people predicted decades ago… I’m exhausted that we have to continue to debate this issue.”

He spoke at the Oroville State Recreation Area, where smoke lingered hazy and brown in the air. Around him, fallen trees still smoldered from one of the nearly 7,700 fires that have burned through the state this year. In that area, officials have grouped several fires into the “North Complex Fire,” which destroyed the Butte County community of Berry Creek earlier this week and killed nine people.

All told, nearly 3.2 million acres have burned in California this year, forcing tens of thousands of people to evacuate.

The apocalyptic conditions in California — from the fires to orange daytime skiesand hazardous air — are caused by man-made climate change, Newsom said. And he argued any politician who says otherwise should be removed from power.

For his part, Newsom says California is going to be “aggressive” in meeting its carbon reduction targets ahead of schedule.

California already has an official goal signed into law by Gov. Jerry Brown in 2018 to phase out all fossil fuel-generated electricity by 2045. But Newsom said the fires burning across the West Coast show that benchmark, along with the state’s other climate change reduction targets, aren’t enough.

“I think 2045’s too late,” Newsom said. “We’re looking to fast track all of these efforts, across the spectrum.”

That means getting more electric cars on the road, Newsom said, and investing in green energy. He’s tasked Environmental Protection Secretary Jared Blumenfeld and Natural Resources Secretary Wade Crowfoot to assess California’s climate change strategies and “accelerate all of them — across the board.”

“The excuse of climate change cannot be used to deflect from the fundamental failure to address the fuels build-up in our forests,” Senator Jim Nielsen of Gerber and Assemblyman James Gallagher of Yuba City wrote in a joint statement.

Debt for Climate Swaps
The Verdict is In and Glaciers Win: Barrick Gold’s Controversial Pascua Lama Gets Last Nail in Coffin