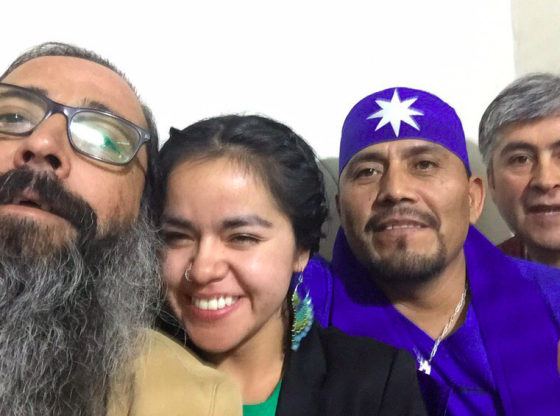 Temuco, Chile, December 13, 2019. – The indigenous leader, Alberto Curamil, who received the prestigious Goldman Environmental Prize this year for his work defending indigenous lands and water conservation, was freed from jail today in a verdict by a local criminal court. Curamil had been in jail for over a year on bogus charges filed against him to thwart his push for environmental protection.

The verdict is a victory for the Mapuche indigenous peoples in Chile which have fought over many decades to protect their lands from encroachment by mega mining and infrastructure projects that systematically destroy their ecosystems. The Center for Justice and International Law (CEJIL), the Center for Human Rights and Environment (CHRE), EarthRights International, The Goldman Environmental Foundation, John Knox, former UN Special Rapporteur on Human Rights and Environment, and Dinah Shelton, Professor Emeritus at the George Washington University Law School and former Inter-American Commission on Human Rights President, recently submitted an amicus curiae brief to the Chilean criminal court, stressing the critical role that the judiciary plays to prevent the criminalization of environmental defenders, requesting guarantees for environmental defenders to conduct their environmental advocacy work safely and free from persecution.

“We celebrate Alberto’s liberation as a key step in the fight to end criminal persecution of those that dedicate their lives to the defense of the Earth,” said Romina Picolotti, co-author of the amicus brief and founder of the Center for Human Rights and Environment.

María Noel Leoni, Director of the Southern Cone Program of Center for Justice and International Law said, “We were very happy to receive this news from Temuco. The decision shows the important role the Judiciary can play in the protection of fundamental rights of human rights defenders. In Chile, we have seen too often that that leaders and Mapuche authorities must confront bogus criminal processes that include long periods of preventive detention. This was the case of Lonko Curamil (Chief). We hope that this case will help establish guidance in other cases for judges to guarantee that preventive detention is not used to persecute and intimidate defenders and indigenous peoples.”

John Goldman, President of the Goldman Environmental Foundation said after the verdict, “Today, Alberto Curamil was vindicated by the Chilean courts and released after 15 months in jail on false charges. We are gratified that justice is finally served for Alberto, a defender of Chile’s sacred rivers and lands, an advocate for the Mapuche community, and a voice for those whose voice has been taken away. We are thrilled that he can now return to his family and community, and that one of the Earth’s protectors can walk free. And we condemn all governments that attempt to silence environmental defenders like Alberto by incarcerating them on false charges for lengthy periods of time.”

More information will be posted as it becomes available.