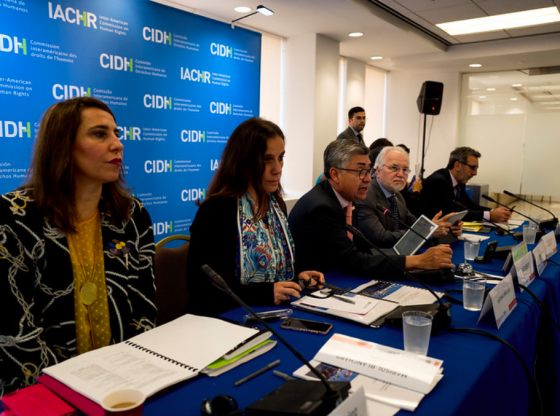 (October 3, 2019 – Washington D.C.) – Commissioners and Special Rapporteurs from the Inter-American Commission on Human Rights (IACHR), along with a room full of engaged public supporters, heard testimonies last Friday from environmental activists across the hemisphere who have been criminalized for their efforts to protect the planet. The speakers called strongly on the IACHR, the hemisphere’s regional human rights body, to defend the defenders.

Dinah Shelton, former Rapporteur for Indigenous Peoples and former President of the IACHR, opened the hearing. She emphasized that the hearing was “extremely important especially in light of the unprecedented climate change that the world is facing today.” Shelton set the stage for the discussion, describing the characteristics and significance of the growing trend of the criminalization of environmental defenders: “Environmental defenders are defending a whole set of human rights and for that work they are being criminalized, they are being prosecuted. They are being subjected to false charges and they are being attacked in multiple ways. More than 140 countries today have a right to a safe and healthy environment. These activists are actually defending that human right. States are misusing criminal law to prosecute them. The main thing we are focusing on is the State prosecution of environmental defenders.” Shelton also highlighted the harmful consequences of criminalization, stating, “This generates not only a tax on individuals and their organizations, but it also has a chilling effect that limits the ability of all human rights defenders. Polluters gain leverage over environmental defenders and hamper environmental enforcement.”

Environmental activists from Argentina, Chile, Mexico, and Peru then offered chilling and emotional testimonies detailing how the police, judiciary, and other State agencies—with the support and complicity of private actors—systematically abuse and criminalize environmental defenders. These governmental and non-state actors do so through arbitrary detention and prolonged imprisonment without trial, false accusations and groundless criminal prosecution that can last years, violations of due process, and smear campaigns, among other tactics.

The victims shared examples from their own cases of how powerful polluters with political clout, media backing, and corrupt control over judges and prosecutors wage a sustained and effective fight against environmental defenders and their supporters. Belen Curamil, the daughter of Alberto Curamil, a local indigenous leader of the Mapuche Tribe in Chile and recipient of this year’s prestigious Goldman Prize, told the story of her father who was arbitrarily detained in 2018 (and is still jailed today) without trial, and whose prosecution has been marred by baseless allegations and due process violations all to stop his work to protect the environment. Milton Sanchez, of Peru, described how he was charged by a public prosecutor for disturbing the peace after speaking out against a mega-mining operation that was slated to impact local lands in exchange for mineral extraction. Eduardo Mosqueda described how he was arbitrarily arrested and detained for more than nine months in 2015 whilst defending the ancestral lands of the Nahua indigenous community. Romina Picolotti, founder of the Center for Human Rights and Environment, one of the coordinators of the hearing, and former Argentine Secretary of the Environment also testified about her experience suffering under a sham judicial prosecution in Argentina. As Secretary of Environment, Picolotti trained environmental compliance officers to enforce environmental laws, carrying out more than 9,000 compliance actions against polluters and ordering closures of companies operating in Argentina’s dirtiest industries. In 2007, a groundless criminal prosecution was initiated in Argentina against Picolotti, which has been ongoing for over 12 years without a trial, in a case marred by false claims, due process violations, and fundamental evidentiary problems.

After hearing the testimonies, the Commissioners and Rapporteurs acknowledged the need for change to protect environmental defenders. Joel Hernandez Garcia, Vice-President of the IACHR, stressed, “if there is something we are facing it’s the existential threat to our planet, and it is at this moment that the role of environmental defenders is paramount.” He called on the IACHR to review what it has done, and what it could do further, to help protect environmental defenders. “We need to look at ourselves, to our system of human rights cases, so that it is more effective, and we need to take urgent measures because the defense of the planet cannot wait for us to resolve the historical lag of the Commission. This is an urgent matter.”

Soledad Garcia Munoz, IACHR Rapporteur on Social, Cultural and Environmental Rights indicated that Latin America “is the world’s most dangerous region for environmental defenders.” She stressed “the essential role of those that defend the environment, the land, the territories, and that protect our planet from the escalating climate crisis that we are living. The very respect and right to a healthy environment should imply the protection of those that defend it. Without the women and men that defend the environment there is no realization of the right to a healthy environment. I hope that the Commission can take steps to address this issue. We have no time to lose.”

Francisco Eguiguren, the IACHR Rapporteur on Human Rights Defenders, said after the victim presentations, “we must again, as the Commission on Human Rights, take the greatest number of actions possible [to address this]. The tragic reality of our continent is that we have abundant natural resources that lead to greed and voracity of many companies, and we should also say it, also of many internal actors that through means such as illegal lumbering and mining, destroy natural resources. These actors are unscrupulous and would threaten or even kill those that in an effort to protect the environment, get in their way.”

Antonia Urrejola, Rapporteur on the Rights of Indigenous Peoples, drew attention to the impacts that climate change is having on human rights and expressed concern that the region is seeing a backlash and regression on human rights. She cited cases in Peru, Chile and Colombia, where many environmental groups—including indigenous communities—are under attack. In Chile, she noted, “we see the use of anti-terrorist laws to criminalize social movements.” Urrejola stressed the importance of reaching out to inter-governmental financial institutions such as the World Bank and the Inter-American Development Bank, which can sway large corporations to act more responsibly and hold up higher social and environmental standards in their investment projects. Finally, she called on the IACHR to focus more on changing the perspectives of the region’s judges. “The judges are also responsible for the criminalization of environmental defenders”, says Urrejola.

Edison Lanza, Special Rapporteur on Freedom of Expression offered his solidarity with the victims and spoke about the report that was issued by environmental organizations in connection with the hearing, which describes a framework for understanding the criminalization of environmental defenders and features details from dozens of cases of environmental defenders across the region that have been criminalized and persecuted in their countries. He noted: “I think the report that you have presented hits the nail on the head, highlighting the tendency of the manipulation of criminal law in the region to attack protesters, to generate long and drawn-out criminal proceedings, and arbitrary detentions to thwart environmental defenders.”

Viviana Kristicevic, Director of the Center for Justice and International Law and a long-time advocate defending human rights victims before the Inter-American Human Rights System, also spoke to the Commission during the hearing, stating, “This is a complicated issue to address, particularly because the persecution that is taking place is legitimized by the apparatus of the State. The criminalization has leverage over communities and people, effectively causing them a ‘civil death’. It’s a disproportionate weight on victims. The Commission should consider emergency legal actions, which would be both opportune and necessary. The Commission has treated similar issues in the past with regards to the persecution of journalists in the region. We must also look at how we have dealt previously with arbitrary detentions and should look at hotspots in the region, particularly countries where this sort of persecution is prevalent.”

Romina Picolotti, winner of the prestigious Sophie Prize in 2006 for linking human rights to the environment, praised the IACHR for drawing attention to this critical threat to environmental defenders, explaining: “As scientific consensus strengthens on the planet’s climate emergency and the existential threat that it poses to humankind, corporate and State actors that have disproportionally benefitted by unsustainable natural resources exploitation, risk losing exorbitant economic gains because of tighter environmental controls. We as environmental defenders are the target of persecution and criminalization geared to stop our efforts to defend the planet. Environmental defenders, as a ‘group’, are being attacked, and this has severe consequences to individuals, to families and to the very idea of sustainable development. The criminalization of environmental defenders is a particularly pernicious threat, because States’ criminal processes have the appearance of legitimacy. The public generally does not realize that criminal law is being manipulated to specifically target environmentalists. We need strong and coordinated international action to protect citizens that are standing up to protect the Earth.”

Link to the video recording of the hearing: https://www.youtube.com/watch?v=EeF2EFwsnyE