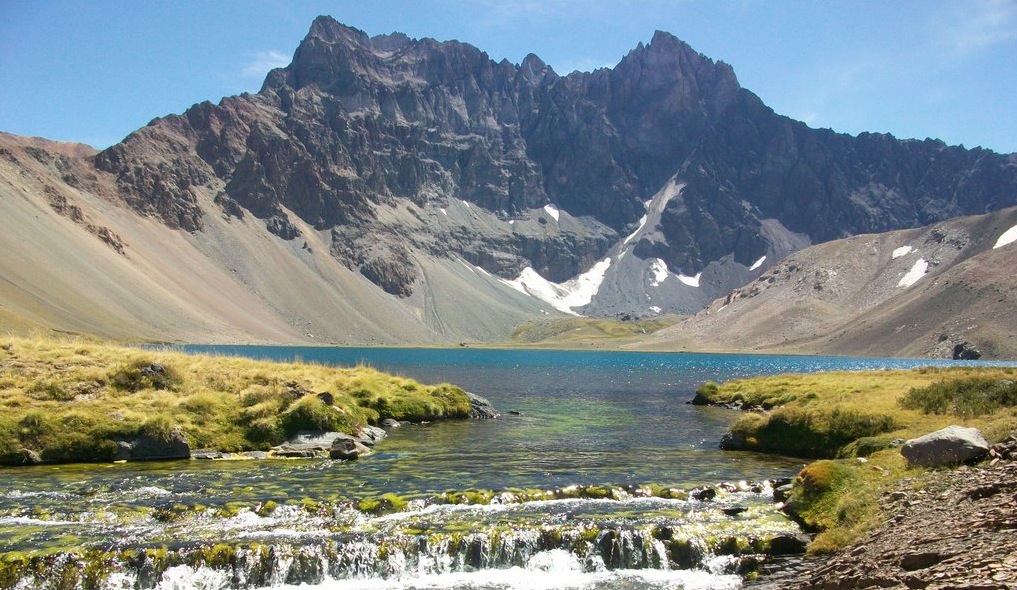 The Center for Human Rights and Environment (CEDHA), an environmental policy organization based in Argentina and presided by Argentina’s former Secretary of Environment, Romina Picolotti, published an extensive report today revealing the presence of glacier and periglacial areas at and around Meryllion Resources’ exploratory project, Cerro Amarillo, in the Andes region of Malargue, Mendoza Argentina (see picture for project site environment).

The report also examines mining activity risks and impacts to glacier resources at Cerro Amarillo, in view of Argentina’s recently passed Glacier Protection Law that has already tripped up a number of mining ventures in Argentina. As Environment Secretary from 2006-2008, Picolotti had begun a crack-down on contaminating industries which historically had been left unchecked in Argentina–one of those industries was mining. Companies like Barrick Gold were scouring the Andes in the early 2000s looking for gold oftentimes plowing straight through glaciers and ice-rich permafrost, both top-of-the-waterchain hydrological reserves that are especially important to high and dry arid environments such as those in the Central Andes. Through incisive lobbying in Congress, Picolotti helped get the world’s first glacier law passed in late 2008 forbidding mining in glacier and permafrost areas, however, the incumbent President Cristina Fernández, vetoed the law as mining companies (including Barrick Gold) quickly came out against the law arguing that it would  mean the demise of numerous multi-billion dollar mining projects including the now infamous gold mining behemoth, Pascua Lama. Fast-forward several years later and sure enough, Barrick Gold’s Pascua Lama is legally stalled precisely due to glacier impacts in neighbor country Chile.

CEDHA’s new report focuses on Cerro Amarillo, a copper and gold mining project owned by junior Canadian mining company Meryllion Resources. Cerro Amarillo is nestled high up in the Andes Mountains, perched above Argentina’s prime wine country in Mendoza Province. Due to local concerns over the potential environmental impacts of mining to sensitive agricultural crops such as grapes and other fruits and vegetables for export, Mendoza Province has been weary of mining operations and has already stalled projects such as San Jorge (Coro Mining), for fear that the pristine water derived from glacier melt could be tainted by mining processes. Water bottling companies have also resisted the arrival of mining operations to the sensitive high Andes ecosystems that are rich in cryogenic resources (basically glacier ice).

In the report published today, CEDHA reveals the presence of at least 30 glaciers in Meryllion Resources’ concession area for Cerro Amarillo, including 13 uncovered white glaciers and 17 rock glaciers (sub-surface glaciers) located at 2,740 to 3,690 meters above sea level (9,000 – 12,000 ft). Rock glaciers are little known because they are beneath the surface of the earth and hidden from view, but they can be colossal in size and can be fundamental to local hydrological systems especially in dry and arid environments typical of the Central Andes. The glaciers and periglacial areas at Cerro Amarillo, says CEDHA, feed critical waterways such as the Rio Grande and the Rio Salado, providing freshwater to communities in at least five of Argentina’s provinces (Mendoza, Neuquén, Rio Negro, La Pampa and Buenos Aires).

CEDHA’s glacier inventory comes prior to a long-in-coming official national glacier inventory called for by Argentina’s new glacier protection law, which should be complete in 2015, but which many fear may never see the light of day if miners have their way. The inventory is already four years behind schedule with the first stage of the inventory, which was to be for mining areas and should have been completed within the first 180 days of the coming into force of the law. That date expired in April of 2011, and not a single priority inventory was ever completed.

The “official” identification and registration of glaciers would put many multi-billion dollar mining projects on the chopping block, as glaciers and periglacial areas (which house ice-rich rock glaciers) are now off-limits to mining operations. Such is the situation with projects like Glencore-Xstrata’s El Pachón (in San Juan Province), McEwen Mining’s Los Azules (also in San Juan), Filo Colorado previously explored by Xstrata Copper (in Catamarca), Filo del Sol by NGX Resources (San Juan), Altar by Stillwater (San Juan) and others, most of which are exploratory projects close to or ready to move into preparation phases if they get a glacier clearance, which according to CEDHA, is unlikely. Projects like El Pachón, Los Azules, and Filo Colorado have already seen international disputes filed against them in mining company home countries (such as Australia and Canada), and as these projects might consider moving forward, they are likely to face legal battles in local courts over their risks and impacts to glacier resources.

Projects like Barrick Gold’s Pascua Lama in Argentina’s San Juan Province, and Osisko’s Famatina project in La Rioja Province, have already run into legal difficulties because they are in glacier terrain and because it has been shown that mining activity at these projects is incompatible with glacier protection. Following the veto of the glacier law in 2008, the law returned to a heated congressional debate  and was reinstated by a slim margin in 2010 becoming the world’s first glacier protection law. Argentina’s President promised she would not veto the law if it was voted a second time and kept her promise in 2010. Since then, other countries such as Chile, Peru and recently Kyrgyzstan (where Canadian miner Centerra has also impacted glaciers at Kumtor) are also considering passing glacier protection laws.

In Argentina, Barrick Gold (as well as other companies such as Glencore Xstrata) were forced to go to the courts to try to overturn the law–a strategy which to date has been unsuccessful. However, the Argentine Supreme Court must still settle a constitutionality dispute over Argentina’s glacier law, filed by Barrick and its allies, claiming the Argentine Glacier Law’s retroactive clause unduly takes away their acquired rights to exploit Pascua Lama and other mining projects.

Meryllion Resources, a junior company from Canada has been exploring Cerro Amarillo in Mendoza Province’s glacier rich region in the Malargue Department for a number of years. The company was hoping to conduct more than 5,000 meters (16,400ft) of drilling during Argentina’s southern summer (November – March), but that intention ran into a brick wall recently when Mendoza Province’s Legislature refused to give Meryllion Resources a glacier clearance to move forward with mining activity. “Get your ice in order first” was the verdict from the legislature, and Meryllion will have to wait for the official glacier inventory to show that there are no glaciers, rock glaciers or ice-rich permafrost between the company and the copper and gold it wants to extract at Cerro Amarillo.

CEDHA’s report and inventory is a new hurdle for the company, as the environmental policy organization’s report anticipates the official report–revealing numerous legally protected cryogenic resources (ice resources) in Cerro Amarillo’s mining concession area, suggesting that the road for Meryllion Resources to move forward with Cerro Amarillo will be an icey one. If CEDHA’s analysis is right, much of the concession given to Meryllion Resources for Cerro Amarillo, will be deemed off-limits to mining.  Ricardo Villalba, Director of Argentina’s Glacier Institute (IANIGLA) and currently in charge of carrying out the official glacier inventory was unequivocal to the press:

“All of the area inventoried [as having glaciers] becomes automatically protected by the glacier law. The law states that in those areas all mining activity including exploration and extraction, are off limits.”

The non-profit group that carried out the inventory and study calls on public officials to deny mining permits to companies in areas known to have glaciers until the IANIGLA finishes up the official inventory, but also until the proper studies can be completed to rule out all potential glacier risks and impacts. Jorge Daniel Taillant, CEDHA’s founder and director, and author of the Cerro Amarillo glacier inventory and report says, “The IANIGLA’s glacier inventory does not suffice for a glacier clearance, and that’s because the IANIGLA is only identifying visible glaciers (which would include rock glaciers) however they are not carrying out a detailed inventory and analysis of periglacial environments (permafrost), which could also contain ice-rich reserves which are also protected by the Glacier Law.”

Taillant adds, “The Glacier Law obliges public agencies and private companies to carry out inventories to identify the presence of glaciers, and studies to prove that their operations do not adversely impact glacier resources. And while those studies should have been completed for mining projects in glaciers areas (like Cerro Amarillo) back in 2011, no one has complied with the law.”

Romina Picolotti, CEDHA’s co-founder and president, and former Environment Secretary of Argentina until she resigned following the President’s veto of the former Glacier Law, added, “Because of the state of non-compliance by the responsible agencies and the mining companies, CEDHA has taken on it’s own initiative to inventory glaciers and assess risks and impacts from mining operations in provinces like La Rioja, San Juan, Catamarca and now Mendoza. We’ve produced a number of reports to show that mining is happening where there are glaciers and that there are already impacts to these important and sensitive hydrological resources. We hope that this report will help shed light and avoid glacier risks and impacts at Cerro Amarillo.”

CEDHA began looking at Cerro Amarillo in 2012, when a Canadian investment rating agency contacted the environmental group inquiring about the project, as they wished to know both if there were glaciers or periglacial environments in the area, and if the project would be deemed legal under the glacier law. More recently, and upon the request of local communities that did not know if there were glaciers in the concession area, and concerned that the official agencies were not complying with their obligations to publish information about mining risks to glaciers in the area, CEDHA decided to carry out a full glacier inventory and impact analysis.

CEDHA’s report and the inventory can be downloaded at:

Romina Picolotti speaks on her time as Environment Secretary, Environmental Policy and on the Political and Judicial Persecution she Faces for her Environmental Advocacy
CEDHA Presents at World’s Biggest Environmental Law Conference