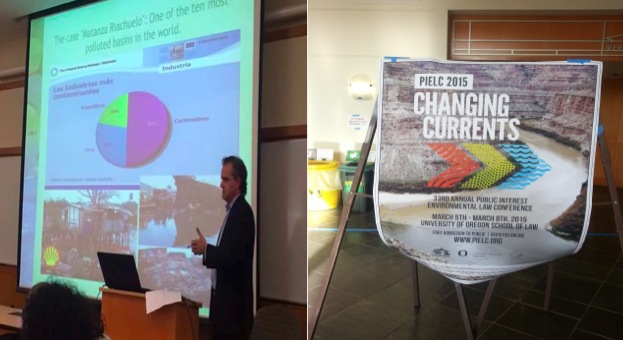 The Public Interest Environmental Law Conference (PIELC) is a premier annual gathering for environmentalists worldwide, and is distinguished as the oldest and largest of its kind. The PIELC historically unites more than 3,000 activists, attorneys, students, scientists, and concerned citizens from over 50 countries around the globe to share their experience and expertise. The conference is organized by  the University of Oregon, School of Law.

Juan Miguel Picolotti, legal coordinator of the Center for Human Rights and Environment (CEDHA) participated as a speaker in the PIELC session on “Helping affected communities to gain access to environmental justice”. He presented “The Matanza Riachuelo River” case, reviewing the strengths and weaknesses of the Argentine Supreme Court’s ruling on one of the world’s 10 most polluted basins. In his evaluation of progress since this precedent-setting  ruling, he stated: “While the Court issued a landmark judgment from a legal point of view, particularly as it is the first precedent of the Court on environmental remediation, we still have a long way to go in terms of implementation and enforcement of the judgment because despite some advances we have significant setbacks since the ruling”.