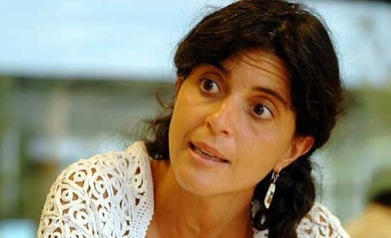 August 10, 2015. After nearly 8 years, a federal tribunal of Argentina rejected the hitherto unconfirmed accusations leveled at Romina Picolotti, when she served as Argentina’s Environment Secretary from 2006 to 2008, which alleged the misappropriation of hundreds of millions of pesos of public funds. No evidence was ever produced to sustain these allegations published in Argentina’s largest circulating daily newspaper, Clarin, however the investigation persisted for nearly a decade, through a tumultuous Argentine political arena.

The accusations stemmed from an accusatory article published by the Clarin newspaper and were taken up by investigator, Guillermo Marijuan. Picolotti was at the time aiming to close Papel Prensa, a newsprint factory owned by the Grupo Clarin, due to the pulp mill’s heavy contamination of local waterways in Buenos Aires Province. Marijuan investigated Picolotti for 8 years, despite never obtaining evidence of Clarin’s accusations against her. Marijuan’s investigation also included inconsequential searches of the Center for Human Rights and Environment.

The ruling, published quietly, and with no media coverage on August 10th, 2015, finds Picolotti innocent of the accusations of misappropriation of funds leveled at her by Marijuan during her tenure as head of Argentina’s Environment Secretary. The ruling found Romina Picolotti innocent of accusations that she had hired hundreds of friends and family. She was also found innocent of accusations of favoring companies in pursuing madatory environmental insurance for contaminating industries. The ruling also found no irregularities in the ex-Environment Secretary’s transfer of funds for waste site clean-up programs in her native province of Cordoba.

Romina Picolotti has sustained her absolute innocence since the accusations by the media giant Grupo Clarin were originally published against her in July of 2007. During that time, Picolotti was on a crusade to reign in contaminating industries, and for the first time in Argentina’s history, the federal environmental authority audited and fined hundreds of companies. Picolotti’s adminsitration, aided by the US Environmental Protection Agency, and receiving one of the World Bank’s largest ever clean up loans, and globally prized for its work on promoting innovative environmental policy, built an environmental compliance task force that conducted more than 9,000 acts of compliance in less than the three short years she held the highest environmental office. She clamped down on highly polluting industries such as the petrochemical industry, tanneries, pulp mills, mining companies, and wood mills. Romina Picolotti also ordered a closure of the oil refinery installations of the multinational company Shell, after finding over 800 violations of the environmental code at Shell’s refinery. Picolotti actively worked on the passage of extremely resisted laws in Argentina, including the forestry law, environmental insurance regulation and the glacier protection law, which has placed at least a dozen multi-billion dollar mining projects at stake for closure.

Picolotti made many enemies during her term as Argentina’s Environmental Authority, and her work team and family regularly received death threats following her environmental compliance audits and company closures. She stepped down from office in 2008 following President Cristina Fernandez’ veto of the unanimously voted Glacier Protection Law, which placed projects such as Barrick Gold’s Pascua Lama in direct conflict with the law. The President’s veto today is commonly refered to as “Barrick’s Veto”.

Today, Romina Picolotti continues her environmental and human rights advocacy work, engaging in campaings and actions to revert climate change and stop the advancement of Hydraulic Fracturing (fracking), an industry estimated in Argentina to be worth over US$500billion.

After eight years of investigation riddled by severe irregularities and procedural rights violations of the investigative process, Picolotti was liberated of all charges originally filed by investigator Marijuan.

The Catholic Church, the Environment and Argentina
Fracking and Human Rights