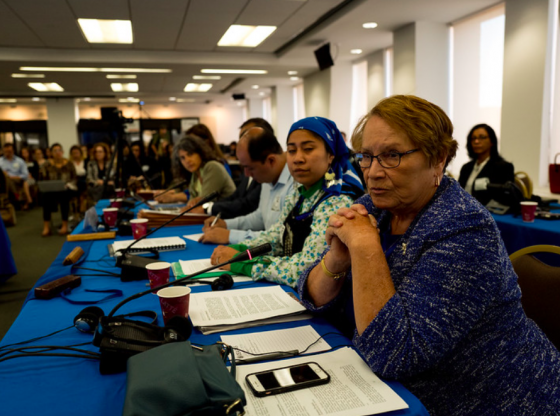 ENVIRONMENTAL DEFENDERS UNDER ATTACK IN TIMES OF CLIMATE CHANGE

Victims and Experts testify on the Criminal Prosecution of Environmental Defenders for their work including Assaults, Arbitrary Imprisonment, Defamation, and Smear Campaigns

As the Climate Change Crisis Grows, Fossil Fuel Companies and other Polluters Conspire with Corrupt Governments to Target Climate Activists

(September 27, 2019 – Washington D.C.) – Never before in history have the Earth’s climate and natural systems been so threatened. And never before have environmental defenders been under such attack as a result of their efforts to protect the planet. These are the themes that emerged from a landmark international human rights hearing and new report released today.

The Inter-American Commission on Human Rights (IACHR) in Washington, D.C. held a landmark thematic hearing today on the persecution of environmental defenders in the Americas, focusing specifically on the misuse of States’ criminal justice systems to punish and deter environmental defenders and their work. The IACHR heard from some of the Earth’s most influential, and yet most vulnerable,environmental defenders—activists that put their lives on the line to protect our planet and to stop the environmental pollution that is causing climate change, devastating some of our most pristine ecosystems, and affecting the health of local communities across the globe.

The hearing reviewed the increasingly sophisticated and alarming State practice of criminalizing environmental defenders’ work with smear campaigns, false accusations in social media and newspapers, baseless criminal investigations, continuous harassment, and bogus criminal lawsuits marred by evidentiary problems and due process violations. The hearing also examined the ways that powerful polluters with political power, media backing, and corrupt control over judges and courts wage a sustained and effective fight against environmental defenders and their supporters.

Globally recognized human rights and environmental activist Romina Picolotti, winner of the prestigious Sophie Prize in 2006 for linking human rights to the environment and the United States EPA’s Climate Protection Award in 2008, praised the IACHR for drawing attention to this critical threat to environmental defenders, explaining: “As scientific consensus strengthens on the planet’s climate emergency and the existential threat that it poses to humankind, corporate and State actors that have disproportionally benefitted by unsustainable natural resources exploitation, risk losing exorbitant economic gains because of tighter environmental controls. We as environmental defenders are the target of persecution and criminalization geared to stop our efforts to defend the planet. Environmental defenders, as a ‘group’, are being attacked, and this has severe consequences to individuals, to families and to the very idea of sustainable development. We need strong and coordinated international action to protect citizens that are standing up for us to protect the Earth.”

The hearing was requested by more than thirty environmentalists and grass roots movements, along with current and former United Nations Special Rapporteurs, former IACHR Commissioners and Presidents, and a former IACHR Rapporteur.

A comprehensive report released in connection with the hearing describes a framework for understanding the criminalization of environmental defenders and features chilling details from dozens of cases of environmental defenders across the region that have been criminalized and persecuted in their countries. Some of these activists travelled to Washington D.C. to tell the IACHR of the relentless persecution they suffer because of their environmental activism. The emerging stories are troubling and telling of the growing persecution that is taking place.

Belen Curamil, the daughter of Alberto Curamil, a local indigenous leader of the Mapuche Tribe in Chile and recipient of this year’s prestigious Goldman Prize, told the story of her father who was jailed in 2018 (and is still jailed today) without trial, and whose prosecution has been marred by baseless allegations and due process violations. “The Mapuche struggle is a struggle for life”, said Belen Curamil in Washington D.C., “for balance in nature, to be a better people that coexist with the land. But in Chile, this is not recognized, the response is always the same: repression, jail, criminalization, harassment, and the absence of justice for our people and environmental activists. Today, my father, Alberto Curamil, is a political prisoner because he is an environmental defender and a traditional Mapuche authority. We only ask for a fair and impartial trial to demonstrate his innocence, but the trial continues to delay. Free Alberto Curamil!”

Eduardo Mosqueda is another environmental defender who was arbitrarily arrested in 2015 whilst defending the ancestral lands of the Nahua indigenous community. Along with Mosqueda, 33 indigenous leaders protesting to protect their environmental resources were also arbitrarily detained and arrested by the Mexican State of Colima. Mosqueda remained in prison for 10 months until a federal court determined there was no basis for criminal charges against him.

Milton Sanchez, of Peru, described how he was charged by a public prosecutor for disturbing the peace after speaking out against a mega mining operation that was slated to impact local lands in exchange for mineral extraction. The government sought 7 years imprisonment in his case.

Romina Picolotti also testified before the IACHR about her experience suffering under a sham prosecution in Argentina. Picolotti founded one of the most influential environmental NGOs in Argentina, the Center for Human Rights and Environment (“CEDHA”). She also served as Argentina’s Secretary of the Environment and Sustainable Development from 2006-2008. As Secretary, Picolotti trained environmental compliance officers to enforce environmental laws, carrying out more than 9,000 compliance actions against polluters and ordering closures of companies operating in Argentina’s dirtiest industries. She was instrumental in ordering a temporary closure of Shell’s largest refinery in Latin America for hundreds of violations of Argentina’s environmental code. In 2007, a groundless criminal prosecution was initiated in Argentina against Picolotti, based on false allegations by a corporate polluter under investigation by Picolotti’s Secretariat for environmental compliance. The criminal prosecution against Picolotti is ongoing, over 12 years later, in a case marred by false claims, due process violations, and fundamental evidentiary problems.

The cases presented before the Commission are examples of the sophisticated use of criminalization against environmental defenders, as retaliation for their work. Many criminal cases against environmental defenders reflect similar improper tactics: baseless accusations, due process violations, and other procedural irregularities—including arbitrary pretrial detention, evidentiary manipulation, and illegal delays in the proceedings.

A full list of recommendations is available in the report.

link to the formal petition:
https://center-hre.org/wp-content/uploads/Request-for-Public-Hearing-English-07.26.2019.pdf