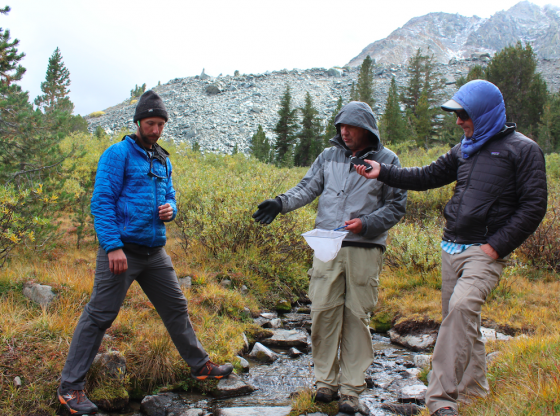 [Listen to Podcast about this field visit]
October 3, 2019 – Cryosphere and hydrology experts, policy makers and cryo-activists carried out a 3-day field visit to California’s Eastern Sierra Nevada, to observe and register biotic elements in hydrology flows from periglacial environments, including rock glaciers and other permafrost areas, key hydrological contributors to California’s hydrology in post snow-melt periods each year and during drought years.

The field visit took place just before the first winter snowfall hit the Sierra Nevada mountains. It was a rare opportunity for scientists, policy makers and cryoactivists to get together to visit and discuss ways to promote  cryosphere conservation and awareness of high mountain hydrological resources.  Connie Millar, one of North America’s most renown rock glacier specialists for the Sierra Nevada was key to plan out the 3-day rock glacier tour. Dave Herbst, an accomplished biologist and hydrology expert for the Sierra range carried out water sampling. The team was joined by the head of California’s Environmental Protection Agency, Jared Blumenfeld, as well as Daniel Taillant (CHRE Director) and Adam Riffle (CHRE’s Cryoactivism Coordinator for the US North West) to also carry out programmed field work and rock glacier recognition in the area.

Little is known of California’s periglacial (permafrost regions) and the role they play in terms of sustained water provision. Periglacial areas are generally located between visible surface glacier ice (largely extinct or diminished  in the Sierra Nevada) and the lower tree line. Permanently frozen grounds in this swath of land can hold large volumes of ice that is either stored for later melt provision, or the lower fringes of which are constantly melting into ecosystems below. Rock glaciers and more extensive permafrost grounds will survive the dwindling and extremely vulnerable glacier remnants of California’s Sierra Nevada Mountains.

Rock glaciers, one of the key features of periglacial environments, are large flowing rock debris mixed with ice content, that slowly oozes down mountain sides due to weight, plasticity and surface lubrication (from melting water that seeps through rock to the rock glacier base). They form through what is known as the geo-cryogenic process, which consists of cyclical snow/water precipitation, percolation into the surface rock debris and cyclical freeze thaw cycles that over time, send ice down and rocks upwards towards the surface.

“You could be standing on a massive rock glacier, over a mile long and half a mile wide, and hundreds of feet thick, and not even know it”, says Daniel Taillant, Executive Director of the Center for Human Rights and Environment (a member of the Sierra Nevada Alliance), who brought the field work team members together for the field observations. “Ice is not visible at the surface. Nonetheless, the streams from the foot (or snout) of rock glaciers, feed hydrological systems in many high mountain environments. We have mapped over 800 rock glacier features throughout the Sierra Nevada.”, stated Taillant.

The team met up in Lee Vining and programmed to visit three rock glaciers and their hydrological basins, including the Excelsior Rock Glacier (immediately below Mt. Excelsior), the Barney Rock Glacier (in the vicinity of Mammoth Lakes) and the Gibbs Rock Glacier (adjacent to and below Mt. Dana, the Sierra Nevada’s second highest peak).