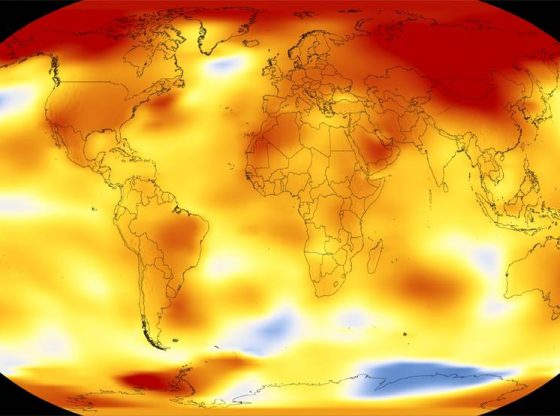 January 13, 2022. NASA and the National Oceanic and Atmospheric Administration (NOAA) published a report today, indicating that 2021 ranked as the sixth warmest year in recorded history.[1] Last year’s extremely high global temperatures occurred despite La Niña – a cyclical multiyear oceanic phenomenon in which cooler water from the Pacific Ocean depths rises to surfaces near the coasts of South America – playing a substantial role in cooling global temperatures.[2] The cooling function of La Niña, however, was ineffective in 2021, says NASA, to hold back global warming.

NASA data shows that global land and sea surface temperatures have reached 0.84°C above the twentieth century average. This is of grave concern considering that most climate scientists agree that we must keep global warming from exceeding 1.5°C in order to avoid catastrophic tipping points that could move Earth’s climate into an irreversible collapse. The greatest warming occurred in the Northern Hemisphere—with the Arctic regions warming nearly four times faster than the warming occurring throughout the rest of the globe[3]. Some of the effects of these trends included extreme heat waves across the Pacific Northwest, forest fires and the first rainfall in the Greenland ice cap.[4] About the same time as the report was released, Australia hit a Southern Hemisphere record of 123°F in the small western coastal city of Onslow. A few days earlier, Buenos Aires Argentina hit 106°F, the hottest recorded temperature for the month of January in over a century.

For the United States, 2021, was the warmest year since 1895 – with the West experiencing extreme heat and intense dryness. Global climate trends have resulted in yet “another year of billion-dollar disasters”, wherein 20 events in 2021 (the second highest), caused $145 billion in losses (third highest)[5] – including Hurricane Ida, savage western wildfires, and Louisiana flooding, among other impacts.

The Annual Global Analysis for 2021 report, comparable to an annual health check-up for the planet, makes clear that the Earth’s warming is increasing due to heat-trapping gases, as global concentrations of carbon dioxide and notably methane, an even more potent global warming causing gas that reached an annual record of approximately 1876 ppb.[6] Methane gas is considered a “super pollutant” that contributes more intensely and more immediately to global warming, with 86 times the warming impact compared to CO2.

Climate analyst chief Russell S. Vose explains that while ranking is not the most effective signifier of climate change, it denotes a linear warming trajectory. In the midst of this summer’s sweltering heat, NASA researcher, James Hansen, warned that the greenhouse effect was unavoidably to blame for “changing our climate now”.[7] Gavin Schmidt explains that the data vindicates the long-term warming which has been detected since 1988.[8]

The Loss of the World’s Frozen Places