Home /fracking, press/Fracking Well Blows in Argentina Spewing Gases and other Toxic Chemicals into the Environment 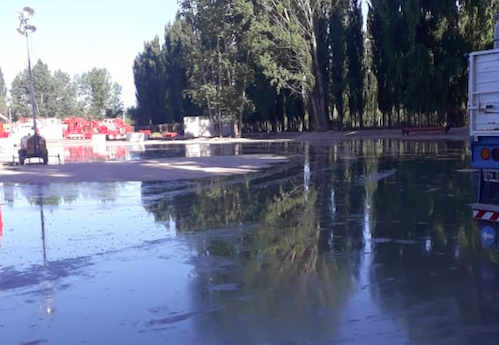 In the small agricultural town of Allen, and alongside of some of Argentina’s most valuable organic exports such as pears and apples found in boutique stores the likes of Whole Foods, a fracking well burst last Saturday, spewing an unknown volume of toxic sludge and gases. A second leak sprung just hours later. Neither the operator (YPF) nor the Argentine authorities have been able to quantify the damage.

The compromised well is located at the same site where less than a year ago, environmental groups from the United States set up a FLIR camera (with infrared technology) invited by concerned local residents that have been promised development through exploiting Argentina’s Vaca Muerta shale reserves, traveled to Argentina to see if YPF’s Fernandez Oro compression and processing station was leaking gases. It was, significantly and  uncontrollably (see video register below).

This accident follows another that occurred recently in October, in similar situation at a site called Bandurria (a well in Argentina’s Vaca Muerta shale formation). The Bandurria incident spewed toxic petroleum products, fracking fluids, sludge and gases for an uncontrolled 36 hours before it was contained.  This new incident is yet another indicator that Argentina’s oil and gas sector is not able to guarantee the safety of its citizens and ecology in fracking activities. Fracking is already banned in many countries and in many localities due to its high level of risk to the environment and people. The Inter-American Commission on Human Rights, concerned with the advancement of fracking in the region, recently called for more information regarding the risks and impacts to local communities that the activity represents.

While there is still no information regarding the nature of the blowout, because it is a well that was in a fracking stage, it is presumed that the toxic chemicals released consist of methane (highly impacting to the climate), fracking fluids including acids and other liquids used to facilitate the extraction and processing of the product, and fuels and fuel derivatives which are high toxic for people, for flora and for fauna. During hydraulic fracturing, millions of liters of water and thousands of liters of fracking fluids are injected deep into the ground, as well as many tones of silica used to open fissures in the geology. The blowout implies that a significant volume of these chemicals and toxic agents are now uncontrollably spewed into the atmosphere and surface.

The accident was most likely the result of excessive pressure generated by the fracking procedure, exceeding the capacity of the equipment utilized by YPF to conduct the operation. The local environment is immediately at risk from the toxic emissions and liquids, particularly air emissions that may move directly into inhabited areas, as well as liquid contamination that may compromise the local water supply. Coincidently, at the same time local residents were trying to gather information about potential danger to their drinking water from the incident, residents of Añelo, at the heart of the Vaca Muerta shale play and center of most of Argentina’s fracking activities, residents were presenting a complaint to the local legislature because their water has reached levels not apt for human consumption. Authorities in both cases argue that fracking activity (including the recent spills) have not compromised drinking water.

The video below shows gaseous emissions registered at the YPF Fernandez de Oro site during a mission by environmental groups to Argentina in April of 2018.