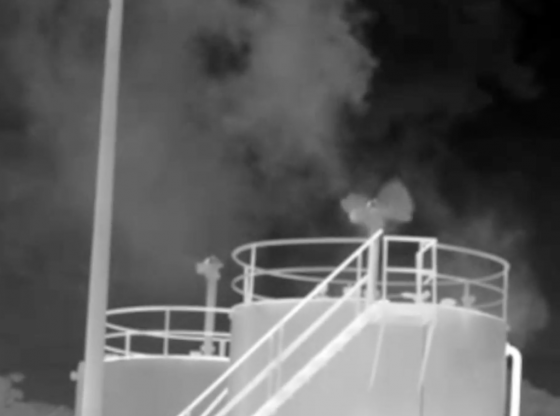 A technical expert on the use of infrared camera equipment working for Earthworks visited Mexico and registered numerous videos that show that the national Mexican oil company, PEMEX, and other international companies are spewing toxic fumes that are dangerous to the environment and people into the atmosphere in the State of Veracruz.  At every one of the nine sites visited, Earthwork’s infrared camera recorded toxic gases emanating into the air. In some cases, the fumes were in highly populated urban centers.

The films were produced with a FLIR Gasfinder 3202 infrared camera, the same type of camera used by the oil and gas industry to check for fugitive emissions, of toxic gases such as methane, which is 100 or more times more potent as a global warming gas than CO2. Other gases that might be included in the captured images are Volatile Organic Compounds (VOCs).  The FLIR camera, which requires special training to use, works in the infrared spectrum and captures gases that are invisible to the naked eye. You could walk right up to these deadly gases and now know that they were in the air.  Earthworks, along with Clean Air Task Force and the Center for Human Rights and Environment visited several sights in the area at and immediately around Poza Rica, in the State of Veracruz, Mexico, one of the central hubs of oil and gas production in Mexico.

The videos were shot one day before a regional workshop including some 26 non-governmental organizations that received training on the use of infrared technology to register gas leaks at oil and gas sites. Fugitive emissions were recorded by the trainers at the San Adres Compression Station in Veracruz, in storage tank facilites (Pemex 709 Remolinos 1984), and at well right in downtown Poza Rica, where the one-day workshop was held. One of the most evident leaks was ironically adjacent to the Faculty of Health of the local university at Poza Rica. Earthworks was able to record dangerous emissions at all nine sites visited during their two day tour of Veracruz.

Alejandra Jimenez, of the Human Rights United Network of Mexico (member of the Alianza Mexicana Contra el Fracking), and a loca resident of Poza Rica attended the workshop and also accompanied Earthworks on the filming sessions at the oil and gas sites. She stated to local press, “the material registered provees that PEMEX is placing human health of local residents at risk. The camera makes what is normally invisible contamination, visible. This is a threat to the environment and to the health of the community. PEMEX, CFE and other oil and gas companies in the area are responsible for these emissions and we have no idea what else is out there. We have no information. The Health Ministry of Veracruz should call for a study of these emissions to determine exactly what we are up against, how much is being emitted and what the risks are for local communities.”

Mexico has approximately 36,000 oil and gas wells across the country. There is no present information regarding fugitive emissions monitoring.

Link to the Press Release by the Alianza Mexicana contra el Fracking.
http://www.nofrackingmexico.org/videos-infrarrojo-prueban-que-pemex-pone-en-riesgo-la-salud-de-habitantes-del-norte-de-veracruz/

For more information on the filming of the emissions videos, contact: