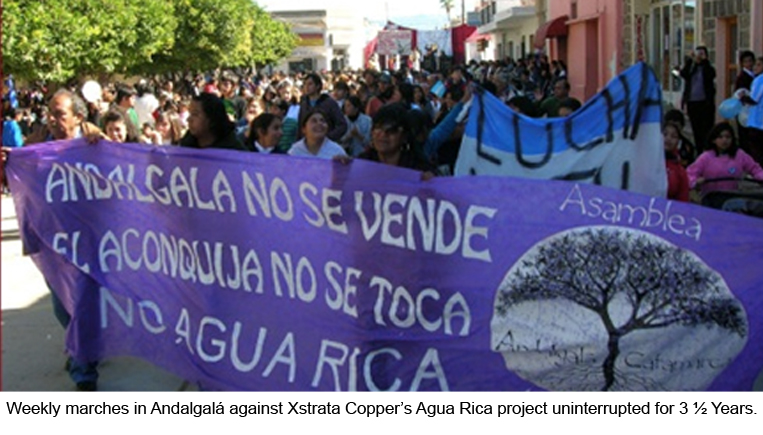 In the midst of rising social tension around the advance of Xstrata’s Agua Rica project, Catamarca’s Mining Minister, Rodolfo Micone, speaks to a national mining publication El Inversorabout the province’s strategy of “neutralization of social tension” against mining projects in his province. Catamarca is home to three of Xstrata Copper’s projects, Mina la Alumbrera (nearing completion), Agua Rica (hoping to launch) and Filo Colorado (suspended in 2005).

Xstrata has been mining gold at the remote La Alumbrera site for a decade. When Yamana Gold proposed to develop nearby Agua Rica, the downstream community of Andalgalá emphatically rejected the project. Yamana’s advance to explore Agua Rica spurred the creation of a local assembly that blocked access to the mine site in December of 2009. When the provincial government sent in police forces to disband the roadblock, tensions exploded into violence. The police set the dogs loose on the peaceful protestors. Women dragged across the ground, were beaten and jailed. But the roadblock remained, and nearly 1,300 days later, it still stands.

Since the December 2010 policy repression, hundreds, sometimes thousands of local community members (in a town of 18,000) have spontaneously and peacefully marched around the local plaza in Andalgaláon 184 consecutive weekends (see photo), with a sole objective, to stop Agua Rica from ever happening. To the surprise of a steadfast population firmly against the mine, Micone states to El Inversor, that social opposition to investments by Xstrata Copper were progressively “neutralized” and “diluted”. He attributes this supposed neutralization to the effectiveness of “control centers” at key localities, “with trained local personnel”, which are in theory established to provide communities with information about mining operations. The reality on the ground is quite different however.

Sergio Martínez, Angalgalá’s former Secretary of Environment and currently working with the local prosecutor’s office resigned from his post as the highest environmental authority, suggesting the mayor did not have the political will to address the environmental impacts of mining. Today he is staunchly against the provincial government’s strategy to “neutralize” social opposition to mining, and says it’s a violation of human rights. Martinez, who has become a strong community voice against Agua Rica, says,

“They’re persecuting us. There are more than 40 individuals from our town who have legal cases against them from the authorities simply because they are defending our environment. My whole family is now under judicial persecution for our community’s opposition to Agua Rica. What the Minister says is simply not true. Opposition to Agua Rica has never stopped in Andalgalá, what has happened is that they have subdued us with sticks and violence, and now they’re criminalizing our peaceful protest.”

Martinez is no radical environmentalist, he has seen the evolution of the Agua Rica conflict as a local authority, and has watched incredulously as the provincial public authorities have sent soccer hooligans to beat and disburse peaceful protests. Yamana Gold, the company that ran Agua Rica prior to Xstrata’s recent takeover hired police thugs to secure their headquarters in Andalgalá. At each local march, Agua Rica’s security personnel would come to the plaza, and line up to stare down, laugh at and intimidate peaceful marchers as they walked around the plaza in their weekly gathering. The current provincial government is only ratcheting up police forces in Andalgalá, says Martínez, “they don’t even let us walk past the Agua Rica headquarters any more, but opposition is not subdued or diluted, that’s simply false”.

During the height of conflict, even Agua Rica’s project staff, including fore example, principal Geologist Ahumada, participated personally in repression against the marchers and has insulted and threatened local environmental groups who have produced reports showing project impacts on environmental resources such as glaciers and periglacial environments.

But despite government’s targeted efforts to thwart opposition, Andalgala’sweekly peaceful demonstrations have been unwavering and maintained without interruption for three and a half years, since the police repression in February 2010. That event led to a court order to suspend Agua Rica until social peace was restored.

Local residents have approached the “control centers” mentioned by the Minister requesting information on water quality and environmental impact studies that the company has produced, but they have never received any documentation. “It’s not true that these centers are providing information about Agua Rica” says Martínez, “it’s a front to say to investors that everything is under control, but in reality, it’s not”.

Xstrata Copper, majority owner of the nearby La Alumbrera gold project, recently exercised an option to buy Agua Rica from Yamana Gold. With the Xstrata-Glencore merger, Agua Rica is anew on the table as one of the company’s potential future production sites and if the company can get around local opposition the project could get underway by 2018. Communications from the company make no reference to the local difficulties that Xstrata has to get their local license to operate, which Martínez says will never happen.