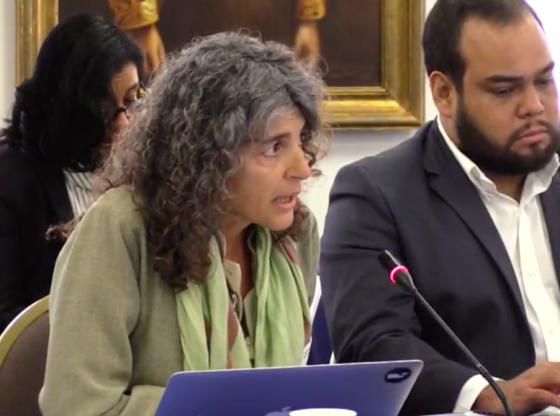 Today, a federal judge dismissed a criminal case against Romina Picolotti, internationally acclaimed environmental activist and former Secretary of the Environment of Argentina. Judge Maria Servini de Cubría dismissed all charges against Picolotti, noting that that the case would be “impossible to proceed” because no criminality could be proven.

These unfounded, and now dismissed, charges against Picolotti included vague, contrived and false allegations of corruption and were made by an Argentine industrialist named Miguel Aznar, whom Picolotti has never met.

The case is but one in a string of bogus charges dating back to 2007, when then Secretary Picolotti’s administration was initiating unprecedented environmental enforcement against Argentina’s worst contaminators, carrying out thousands of inspections, leveling fines and ordering industry closures on more than one-hundred polluters.

The sham criminal prosecutions were and continue to be an attempt to further hinder her environmental defense and compliance advocacy, as Picolotti and the environmental non-profit she founded (the Center for Human Rights and Environment), has continued to work in Argentina to halt polluting industry projects in oil and gas (particularly the promotion of fracking operations), mining projects affecting glaciers, and other contaminating industries. Accusations continue to languish in Argentine courts, going on nearly thirteen years without a single hearing ever held. Picolotti has been afforded no opportunity to defend herself against these baseless allegations, while proceedings have been riddled with irregularities and grave due process violations. Picolotti and her defense team argue that this judicial and political persecution represents a concerted effort to thwart her environmental work in Argentina and across the globe.

The hearing reviewed the increasingly sophisticated and alarming State practice of criminalizing environmental defenders’ work with smear campaigns, false accusations in social media and newspapers, baseless criminal investigations, continuous harassment, and bogus criminal lawsuits marred by evidentiary problems and due process violations. The hearing also examined the ways that powerful polluters with political power, media backing, and corrupt control over judges and courts wage a sustained and effective fight against environmental defenders and their supporters.

Chilean Indigenous Groups Denounce Government for Burning Their Homes
Why for COVID and Not for Climate?