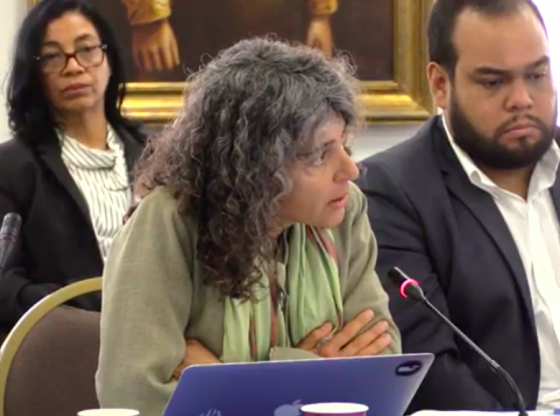 “I don’t know why the Prosecutor called me as a witness, I don’t even know (Romina) Picolotti. I’ve never seen her.”

That’s how one of the witnesses called by Diego Luciani, the prosecutor, testified last Wednesday in the first hearing after nearly 14 years of a criminal investigation against the globally recognized environmental activist and human rights defender Romina Picolotti. Picolotti served as Argentina’s Environment Secretary from 2006 to 2008. During that time, Picolotti placed in motion a environmental enforcement process that Argentina had never before experienced, controlling polluting industries that had never been controlled. This undoubtedly unsettled many economic interests, amongst these the Grupo Clarin (a media giant) for the pollution caused by their paper pulp mill, Papel Prensa.

“Thanks to the Grupo Clarin”, declared the prosecutor, “we are here today”. What he doesn’t tell however, is that behind this legal case that is taking place in Argentina’s tribunals, there is a story of severe industrial contamination. Romina Picolotti, was at that time the highest environmental control authority of the country, and she had decided to close down Papel Prensa, the paper pulp mill owned by the the Grupo Clarin, which to this day is contaminating the Baradero River, with no environmental controls whatsoever.

In his closing arguments, the prosecutor—following the storyline of the Grupo Clarin—attempted to tell a story of dark dealing and supposed harm to the state, perpetrated by the environmental activist, but as was visible during dozens of hours of testimony by more than 30 witnesses, these same witnessed called by the prosecutor supposedly to condemn Picolotti’s actions, once and again, and surprisingly for the court, gave testimony in her favor, clearing her of the supposed irregularities denounced by the July 2007 article published by Grupo Clarin.

It is due to this judicial and political persecution, that Picolotti filed a complaint to the Inter-American Commission on Human Rights (IACHR), for violations to her human rights for a period of more than 14 years, in a unfounded criminal case that is politically motivated to stop her environmental activism against Argentina’s largest polluters, including mining companies, oil and gas companies, paper pulp mills, leather tanneries, lumber companies, and others.

In the complaint before the IACHR against the government of Argentina, due to the abuse and arbitrariness evident in the use of the criminal procedure as a political and judicial persecution weapon, Picolotti describes and offers critical evidence of the reiterative violations of human rights she has suffered, showing the inappropriate use of the criminal process as a reprisal against a recognized environmental activist.

The manipulation of the criminal process is so evident in Picolotti’s case that the maximum human rights tribunal of the Americas, that only investigates very few cases of the many thousands that are filed each year, decided to advance an inquiry to Argentina requesting that the country respond to the allegations.

Evidently, the more than 14 years of this endless case, its relationship to the media and to polluting industries, and the many evident irregularities, such as the introduction of illegal anonymous evidence, the disappearance of this alleged evidence for several days, the many delays in the judicial process throughout an inexplicable decade and a half of investigation, the illegal sharing of the alleged evidence to the media, and the incredible attempt of the court to disallow Picolotti’s lawyer from representing her, led the IACHR to advance the case and ask Argentina to respond.

Additionally, and in parallel, the IACHR held a hemispheric hearing in 2019, focusing precisely on the persecution of environmentalists and human rights defender, as is the Romina Picolotti’s case.

Picolotti’s case in Argentina was named amongst the cases presented at this hemispheric hearing. Notorious international eminencies of the human rights world spontaneously appeared to support Romina Picolotti’s denunciations to the IACHR, including an ex-president of the Commission, and former UN Special Rapporteur on Torture, Juan Mendez, and various ex-Commissioners of the IACHR, such as Ignacio Alvarez, Dinah Shelton and Maria Daniel Rivero, in addition to ex public officials of the US government. These all presented an amicus brief in favor of Picolotti’s defense.

Initially, in response to the incredible accusations of the Grupo Clarin, and the lack of credible evidence to sustain them, Argentina’s judicial power threw out the accusations declaring a lack of merit in the case against the ex-Secretary of Environment, which has been spurred on by the Grupo Clarin.

However new an anonymous accusations emerged that would keep the case open. And so the environmentalist and human rights defender became the subject a criminal case that incredibly and inexplicably, would last over 14 years, allegedly because she wrongfully authorized expenditures. However when Picolotti requested a calligraphy test to show that she never authorized these alleged expenditures, the court refused. The court also refused to carry out a financial audit of the expenses that would have verified their source.

The prosecutor constructed a supposed story of reiterative abuses that attempt to show that Picolotti, a staunch defender of human rights, with an illustrative professional career, used public funds to pay for whisky (when she does not consume alcohol), for ribeye steaks (when she is a known vegetarian), or that she used public funds to pay for visiting places with scantily dressed women.

During Picolotti’s tenure as Environment Secretary from 2006 to 2008, not only did the Environment Secretariat fight alongside the community of Gualeguaychu to stop the construction of two pulp mills along the Uruguay River (Botnia and ENCE), but they also got a Forestry Law passed to protect native forests and communities that were brutally displaced to allow lumber cutting. The Secretariat also led efforts to crack down on the mining sector in an effort to protect glaciers that mining companies wanted to dynamite to extract gold in the Central Andes.

Picolotti and her team of environmental inspectors, carried out during her tenure, with guidance of the US EPA, more than 9,000 acts of environmental compliance and enforcement, and carried more than 100 closures, levying numerous fines to some of Argentina’s greatest polluters.

Never before Picolotti’s administration of Argentina’s EPA, had the government carried out controls at polluting companies. This crackdown was not ignored by the biggest polluters and the lobby that sustains them.

The mining industry declared war on Picolotti, openly publishing articles in Argentina’s press against her. Jose Aranguren, then CEO of Shell Argentina and later Minister of Energy of the Mauricio Macri presidency, physically threatened Picolotti, refraining himself, and indicating in his own words that he wouldn’t hit her because she was a woman. This was because Picolotti had ordered Shell’s refinery (the largest in Latin America) closed following an audit carried out by Picolotti’s inspectors that found over 800 violations the law at Shell’s refinery. In another case, the head of a well known international auto manufacturer failed to import 4,000 heavy and contaminating trucks into Argentina. “The last Environment Secretary let us import the trucks” said the CEO to Picolotti, who refused to let them into the country because they did to comply with the environmental code. “It’s simply a matter of preserving the environment and protecting the health of the population”, she said to the automaker.

One of her key victories at the end of 2008 just before her departure, was the unanimous passage in Argentina’s Congress of the world’s first Glacier Protection Law, putting an end to the aspirations of dozens of multinational mining companies that wanted to dynamite glaciers to get at gold in the Central Andes.

Following death threats to her and her family, and with a judicial, political and financial persecution in full swing, she and her family, and her NGO, the Center for Human Rights and Environment (CHRE/CEDHA) had to leave the country, which was good news for contaminating industries like that of Barrick Gold who strongly fought against Argentina’s new glacier law.

More than 14 years have past since that defamatory article published by the Grupo Clarin on a Sunday in July of 2007, when Romina Picolotti was attempting to close down the media giant’s paper pulp industry, Papel Prensa, for contaminating the Baradero River. It has been more than 5,000 days, more than 120,000 hours, and more than 7 million minutes of a never ending injustice, with an enormous cost to the public, without reason, persecuting an innocent person.

And while the first stage of the legal case against Picolotti comes to an end in Argentina, now it is Argentina that must respond to the Inter-American Commission on Human Rights, on the accusations by Romina Picolotti of the alleged political and judicial persecution and violations of due process that she has suffered.

for the original and full story see (in Spanish):
https://trabajodiario.com.ar/2021/09/05/picolotti-demanda-a-argentina-ante-la-comision-interamericana-de-ddhh/