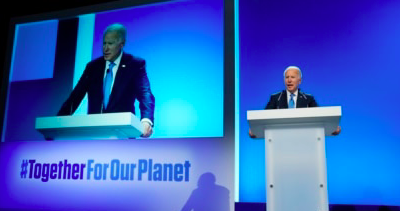 November 2, 2021 – Glasgow, Scotland. Over 100 countries made a historic pledge today to reduce methane emissions by 30% by 2030. The Methane Pledge, signed today at the global climate conference underway in Scotland is a commitment by over three quarters of the global economy to quickly reduce methane emissions from oil and gas production, from agriculture and from land fills.

Methane is a greenhouse gas that is 86 times more potent than CO2 in terms of global warming and reducing emissions of this gas, say the Earth’s leading climate scientists, is the single most effective way to slow climate change and to keep global warming to 1.5C, as set forth by the Paris Agreement.

US President Joe Biden and EU President Ursula von der Leyen, who spearheaded the effort to muster the support of over 100 countries thanked world leaders gathered in Glasgow for COP26, indicating that reducing methane is the single most effective way to tackle climate change now, quickly and aggressively.

Faith Birol, Executive Director of the International Energy Agency said it most clearly, “this pledge is HUGE, if complied with fully, it’s the equivalent of all transportation, cars, trucks, planes and ships on the planet going to zero emissions.”

Methane gas is responsible for about half of global warming and rapidly reducing human-induced emissions in oil and gas, in agriculture and in waste will take care of about one third of emissions reductions needed by mid century to avoid otherwise irreversible global climate change.

More than 100 countries signed the Methane Pledge in Glasgow today, with many more expected to sign by the end of COP26 on November 12th.