The Earth loses a friend 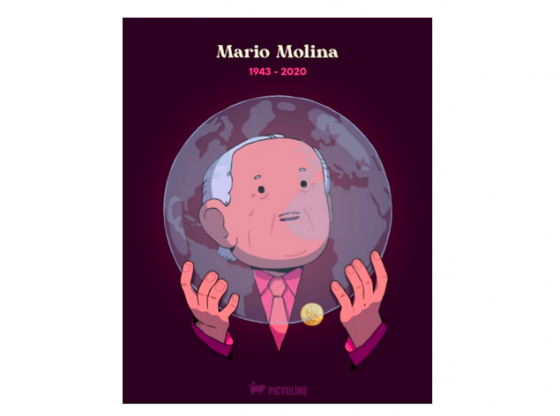 This is the story of child who converted a bathroom into his own little laboratory, using toy microscopes and chemistry sets, then looked up to the sky and saw not only beauty but the fragility of all things. Mario Molina was a brilliant Mexican chemist, who shared the 1995 Nobel Prize in Chemistry for his pivotal role discovering the threat to the Earth’s ozone layer from chlorofluorocarbon (CFC) gases, and the resulting Antarctic ozone hole.

His discovery and research lead to an international effort to solve the first great threat to the global atmosphere, the Montreal Protocol on Substances that Deplete the Ozone Layer. Without Mario’s efforts, CFCs would have continued to destroy the ozone layer, and the incoming solar ultraviolet radiation would have led to countless cases of skin cancer, macular degeneration, cornea and conjunctiva cancer, while also suppressing our immune systems, damaging wildlife, and the environment.  In sum, his work saved millions of lives, and kept millions more healthy and strong.

Mario Molina continued his scientific work and his advocacy, working tirelessly to strengthen the Montreal Protocol. This included his 2009 paper in the Proceedings of the National Academy of Sciences setting out the roadmap for fast mitigation under the Montreal Protocol and other venues to solve the next great threat to the global atmosphere, climate change.  He was hard at work updating that paper to show how close the world is to a catastrophic hothouse, and how we can use the Montreal Protocol to prevent this. He was confident that the protocol could speed its existing control measures, and expand them to include other climate pollutants such as nitrous oxide. He also believed the protocol was a model for other targeted treaties that could address the other short-lived climate pollutants. As a member of the Scientific Advisory Panel of the Climate and Clean Air Coalition he generously contributed his time and wisdom to ensure that States will have the best science available on fast mitigation strategies to act to avert an irreversible climate crisis.

Mario Molina was a brilliant scientist, a tireless advocate, and a gentleman who was always gracious. In times when humanity is being hit by a global pandemic and a climate emergency, we should let his spirit illuminate our path to act at the scale and the speed that we need to reduce climate impacts and build a more just and equitable world.

The Verdict is In and Glaciers Win: Barrick Gold’s Controversial Pascua Lama Gets Last Nail in Coffin
Bach and Gounod’s Ave Maria youth duo call attention to the fire’s of Cordoba, Argentina