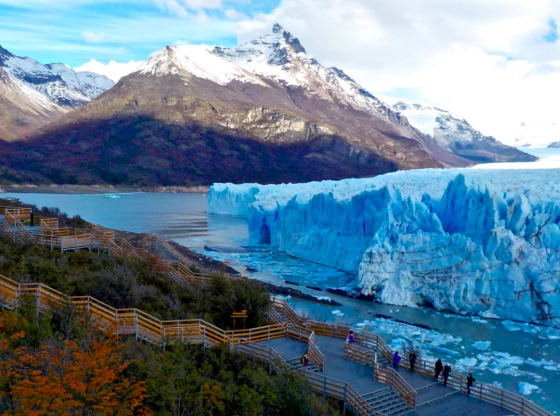 When we decided back in 2008, against all odds, to push for a Glacier Protection Law, we dreamed of a country that took the reigns of its destiny. Andean glaciers contribute 80% of the water flow of mountain rivers in Argentina. They regulate hydrological basins and they are vital to a country that understands that without water, progress and wellbeing are impossible.

Most Argentine rivers run West to East. Argentina’s glaciers were in a complete state of defenselessness with regards to the impacts caused by the mining sector with projects underway in the Central Andes completely protected by promotional laws guaranteeing impunity over the harm they were causing. They were dynamiting glaciers and ensuring a future of drought and devastation.

A number of things happened, which are now of public knowledge. The Presidential Veto of the Glacier Law, my resignation as Secretary of Environment, the struggle for a second Glacier Law (which this time was not vetoed) and the constant call and complaints to ensure the law’s implementation.

Today is an important day, as the Supreme Court—albeit seven years late—finally decided to favor glacier protection. We should recall how we got here and what this ruling implies. In 2010, the Canadian mining company, Barrick Gold, filed an injunction in a federal circuit court, requesting that the newly enacted Argentine Glacier Law be declared unconstitutional. Note there are some 400 glaciers in Barrick’s area of impact at its Pascua Lama, Veladero and related mining areas. Incredibly, within 23 hours, a federal judge overturned a law that had just been voted unanimously. Soon afterwards, the local judge declared himself incompetent to resolve the unconstitutionality of the case, and so it was sent to the Supreme Court. Barrick has gained 7 years of delay to resolve this case, hoping to in the meantime, advance its flagship project, Pascua Lama. All the while, the Glacier Law was repeatedly attacked by high profile adversaries like the former Minister of Energy and CEO of Shell Argentina, Jose Aranguren. His aim was to modify elements of the law, including articles that could break the laws protection reach and allow for mining operations to proceed in glacier areas.

However, despite these intents, the Glacier Law withstood. Succeeding governments tried to avoid its implementation. They employed different strategies and diversion tactics to uphold mining as the answer to development. But despite these efforts, the numbers don’t hold up. Following 10 years of mineral extraction at La Alumbrera, nearby communities have nearly 30% of their basic needs unfulfilled. La Alumbrera publishes some us$10 billion in revenues, but poverty in its surroundings continues to increase. As we expected, Barrick Gold’s operations led to the contamination of the Rio Jachal in San Juan, obliging local communities to avoid the tap, and buy bottled water. All the meanwhile, mining companies continue to get fiscal benefits not offered to local small businesses—although they are a much bigger job creator.

Now lets consider the Supreme Court ruling, which is late but worthwhile. The verdict affirms the constitutionality of the legislative process that produced the Glacier Law (which Barrick Gold had attacked). It also states that neither Barrick nor the Provincial State of San Juan demonstrated that their constitutional rights were affected by the Glacier Law. The ruling also recognizes the tension between individual rights such as the right to property and collective rights, such as the right to a healthy environment, recognized by the Argentine Constitution. Although the Court does not resolve over this tension, it does recognize it.

The Glacier Law has still not been applied, and mining companies have advanced with their projects. Glaciers and periglacial areas have been affected and communities that have expressed their opposition have been oppressed and their advocacy criminalized. Without a doubt today we’ve taken an important step, and everyone that has worked over these years to protect these silent giants, is breathing more deeply. But we should not let our guard down, we must be alert, and call for the implementation of only law that was erected to avoid the pillage of our land.

As we discuss a new social contract, it is important that we not discard our dream to build a country that is a leader of organic farming, in glacier protection, in ecotourism, and in the generation of genuine employment built on innovation in green technologies, … a country that values the environment and its people, and that works to transform nightmares into white dreams.