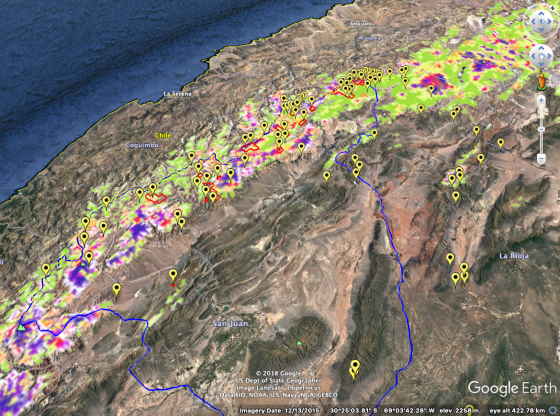 Glaciers throughout the Central Andes of Argentina, Chile, Peru, Bolivia and Ecuador provide critical water supply to ecosystems and inhabitants throughout South America. In Argentina, over 20 thousand glaciers and extensive ice-rich periglacial areas distributed among some of the driest areas of the planet, are a crucial lifeline to Argentina’s population, available year round to its extensive agricultural regions, and to industry and communities.

Mining companies however, have long marked this region for its rich gold, silver and copper deposits, and have been on standby for nearly a decade awaiting a judicial decision from Argentina’s top tribunal as to whether or not they could mine in glacier terrain.

The Argentine Glacier Law was actually passed in 2008, unanimously by Congress, when then activist Environment Secretary Romina Picolotti, ushered the draft law through Congress with no opposition whatsoever. Picolotti was looking for a way to leverage control of large-scale mining companies, over which the federal environmental authority had no jurisdiction—as the permitting and control of mining operations in Argentina were  in the hands of State (provincial) governments. In fact, ultra-pro mining provinces like San Juan, to this day, do not allow their environmental authorities to regulate or control mining projects, that is the task of a special unit within mining ministries that answer to the mining minister (effectively placing the wolf in charge of the chicken coop). Glacier protection was Picolotti’s  way to get a grip on mining companies that had nearly no federal or provincial environmental oversight whatsoever.

Argentines at the time had no idea that there were glaciers (small ones but important ones for their hydrological value) as well as ice-rich permafrost areas which were contributing to the Andean hydrological system, feeding streams and rivers from North to South in Argentina.

Mere  hours after the Glacier Law was approved in Congress, without a single vote of opposition, the mining sector began to awaken to what had just transpired. Barrick Gold was the first to react. Then CEO Peter Munk called Argentina’s President Cristina Fernandez to inform her that her Congress had just killed a US$10 billion gold mining project and that unless she vetoed the new Glacier Law, not only Barrick’s flagship project Pascua Lama but also a handful of other projects in preparation valued at nearly US$20 billion would be incompatible with Argentina’s environmental law. And so, President Cristina Kirchner vetoed the new Glacier Law and very openly justified the veto on the grounds that it was detrimental to the mining sector.

Reacting to what now is referred to as “the Barrick Veto”, what had been a dormant issue in Argentina, and not on anybody’s radar screen, exploded into what is probably Argentina’s most important environmental debate in history, to protect glaciers and permafrost, or allow mining to extract minerals in glacial areas.

For two years, environmentalists, social media, film and tv actors, and just everyday people fought for the return of the Glacier Law, and in 2010, with an extremely thin margin, Congress once again passed a national Glacier Protection Law, the first of its kind anywhere in the world, and again the law, to the dismay of the mining companies, strictly prohibited mining and oil and gas projects in glacier and permafrost areas, and to the surprise of many, made the protection even more extensive, by making the law retroactive.

Argentina’s public officials in the mining sector, and environmental authorities (with the activist Picolotti now out of government and with pro-mining officials appointed to environmental agencies) did everything in their power to avoid implementing the glacier law. They took nearly 10 years to carry out the glacier inventory which the law called for, and failed to crack down on mining operations already in glacier areas, which the law also mandated.

Barrick Gold wasted no time and filed a complaint to the court system, accompanied by the Provincial government of San Juan (where most of the mining and glacier conflict resides), calling for the Supreme Court to declare the Glacier Law unconstitutional. Sure that the court system would take years, or even decades to rule on the case (which it did), pro-mining public officials went about their business as if the Glacier Law did not exist, encouraging mining companies to move forward with investments, although the billions of dollars promised by mining companies to extract gold, silver and copper, did not materialize—perhaps awaiting the long-in-coming judicial verdict.

Over a decade has transpired since the Barrick Veto and nearly 10 years since Barrick filed its complaint to the Supreme Court, but now the verdict is in … and it’s not good for the miners.

In a unanimous decision, Argentina’s Supreme Court Justices knocked down Barrick’s arguments, sustaining that the mining company failed to show that the glacier law affected mining investments. The verdict called the mining company’s bluff, as all of the mining companies in question, including Barrick Gold, along with mining officials in the Provincial Government, denied that  mining projects were located in areas affecting glaciers, and so, say the judges, there should be no conflict with the glacier law.

The Supreme Court verdict also highlighted the important role glaciers and periglacial areas play in providing water runoff , and in regulating water flow for ecosystems and for human consumption.  The Supreme Court verdict  also mentions Argentina’s commitments under the Paris Agreement, and the importance of understanding individual rights (such as those of mining companies) in the context of the great public good and of protecting collective environmental rights  to address climate change trends.

The law stands, and so does glacier protection.

Report from the Center for Human Rights and Environment on the Conflict of the Mining Sector with Frozen Grounds
https://center-hre.org/wp-content/uploads/2012/11/El-Ambiente-Periglacial-y-la-Mineria-en-la-Argentina-English.pdf