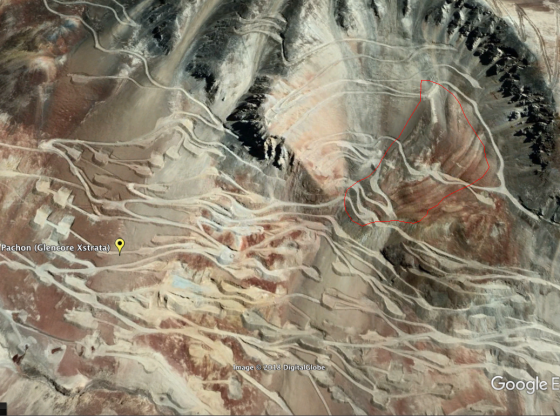 May 16, 2018 – Eight years after the adoption of the world’s first Glacier Protection Law, Argentina’s Glacier Institute (the IANIGLA) finally released the official version of Argentina’s first complete glacier inventory. The IANIGLA has registered 16,968 glaciers, which are now precisely identified and fully protected by Argentina’s Glacier Law, the first of its kind anywhere on the planet. The results of this unique inventory of one of the world’s most extensive yet unprotected natural resources has profound implications for the future of mining in Argentina, since Argentina’s Glacier Law prohibits mining and oil and gas operations anywhere near glaciers or permafrost, and the glacier inventory is now unarguably the most authoritative document indicating where the no-go zones are for mining.

Confirming what environmental groups have been saying for some time, the inventory also signaled that three rather large mining projects (and possibly a fourth) that were in consideration are now in direct conflict with the glacier law,  including Glencore Xstrata’s El Pachon (copper mining in San Juan Province), McEwen Mining’s Los Azules project (also copper mining in San Juan Province), El Altar (Stillwater’s copper mining project, again in San Juan Province). According to Argentina’s official federal government Glacier Inventory these three projects have glaciers either at the very site where mineral extraction was intended (the case of El Pachón and El Altar) which would make both illegal, or in the general area of the mining concession (Los Azules) and Cerro Amarillo (a copper project owned by Meryllion Resources in Mendoza Province). In these two latter cases, careful glacier impact studies would have to be carried out if either project is to proceed.

Ricardo Villalba, the former Director of the IANIGLA and of the Glacier Inventory was categorical with public remarks when the IANIGLA finished the first leg of the inventory, stating, “mining is prohibited in areas where there are glaciers”. Villalba no longer heads the IANIGLA, and ironically, despite his efforts to get the Glacier Law passed when it was being debated Congress, and to the surprise of the scientific community, he is now facing criminal charges for not doing enough to implement Argentina’s Glacier Protection Law after its eventual passage in 2010 . One of the critiques from environmentalists (and by the judge handling the case) is that the glacier inventory is very late, and that public agencies like the IANIGLA and the Environment Ministry, have taken too long and not done enough to implement the law and to ensure that industrial activity that might be in conflict with the Glacier Law be ceased, including at the mentioned mining projects .

While everyone that wants to protect glaciers in Argentina agrees that the glacier inventory just published is an important and critical step in the right direction (it happens to be the first-ever full and official glacier inventory in the world, to accompany the first-ever glacier protection law anywhere), what environmentalists are concerned about and the reason many are criticizing IANIGLA’s inventory is that it falls short of what the law calls for.

Argentina’s glacier law establishes that all of Argentina’s glaciers and its periglacial environment (permafrost areas which include water/ice saturated grounds) are to be protected, irrespective of size.  The IANIGLA however, followed international standards commonly used to map glaciers and to determine what should be registered, setting a cut-off size at 1 hectare (about the size of a football field) for the mapped ice bodies. That means that the 17,000 or so glaciers that are in the inventory do not include glaciers smaller than 1 hectare. While that may seem insignificant to some, the fact is that the Central Andes are full of “small” glaciers (oftentimes referred to as ‘glacierets’). A small glacier the size of a football field can provide enough drinking water for a family of four for nearly four decades. And the totality of small glaciers in the Andes is quite voluminous, possibly contributing more to the hydrology of the ecosystem than all of the larger more voluminous glaciers combined.

Furthermore, argue environmentalists, the IANIGLA also decided to only consider one element of the periglacial environment (of the permafrost zones in the country), even though the Glacier Law calls for a complete inventory of frozen terrains that are rich in water/ice and that serve as water regulators to the natural environment. Lower and warmer fringes of mountain permafrost are continuously melting into the ecosystem, providing critical water provision to water scare environments like the Central Andes year-round, and for this reason, Argentina’s Glacier Law protects them from all possible human impact. Of all of the perglacial environment which is comprised of many components, IANIGLA’s  inventory only includes active “rock glaciers” which are sub-surface glaciers that are visible in satellite imagery due to how they move and how they deposit rock debris on the surface of the earth. This is an arbitrary decision say environmentalists considering it was based on the fact that rock glaciers are simply the most easily recognizable elements of the periglacial environment when the inventory is done as IANIGLA did theirs, utilizing desktop computers with programs like Google Earth. Only a handful of sites visits were actually made to the terrain to map the geoforms. There are many more features to the periglacial environment than are in the inventory, and that are protected by law that should be in the inventory argue environmentalists and glacier experts like Juan Pablo Milana (a Periglacial Environment Expert from San Juan) that has come out against the government sponsored glacier inventory for falling short of what the law mandates.

The conflict between the government, glacier experts, the IANIGLA and the mining sector runs deep in Argentina. The publication of this long-awaited glacier inventory is undoubtedly a watershed moment for cryoactivists (activists defending the world’s cryosphere–the world of ice) and for the mining sector which has been on standby with investments since 2010 when the Glacier Law first appeared.  The conflict actually started in 2008, when then head of Argentina’s federal Environment Secretariat, Romina Picolotti, a prized environmentalist,  was having a hard time pushing for environmental controls in Argentina’s mining sector. In Argentina, natural resources, like in many federalized countries, are managed by provincial/state governments, and in pro-mining provinces like San Juan, environmental controls take back seat to  policies promoting mining. In fact, San Juan’s Environment Secretary has no jurisdiction to intervene in mining operations. All environmental controls are carried out by a staff member of the Mining Ministry–the agency most interested in “promoting” mining, not “controlling” it.

Picolotti discovered a forgotten Glacier Protection Bill in the national Congress which had no political wind to pass, and went to the legislative members one by one, mustering up political support for its passage. She was sure to include an article prohibiting mining where there are glaciers and another calling for a glacier inventory (what was just completed). She also included working in the law specifically pointing to mining and oil and gas operations (which are keen to explore for gas hydrates in periglacial environments). Thinking that the Glacier Protection Bill was about Argentina’s colossal Patagonian glaciers, none of the legislative representatives that eventually voted for the law, realized that the Argentine Central Andes (in mining provinces like San Juan) have hundreds, thousands and even tens of thousands of small but critical glaciers (glacierets) that provide water to downstream ecosystems. The Glacier Protection Bill went unopposed and was voted unanimously in late 2008 by Congress, with no opposition whatsoever, even from provinces like San Juan, that would have to revise their decision to promote mining at high altitudes, where small but critical glaciers thrive.

Mining companies, including Barrick Gold, with infamous projects like Pascua Lama and Veladero which are known to have opened exploratory and access roads through glaciers, and which have even dynamited glaciers to get to minerals, as well as the mining lobby in government came out swinging against the Glacier Law. A few days after its passage, the mining lobby achieved a presidential veto of the law. Argentina’s President bowed to mining concerns and pointed at Picolotti as the culprit of the government’s backing of the law. Picolotti resigned following the veto (infamously referred to as ‘the Barrick Veto’ as it is presumed that Barrick’s CEO, the late Peter Monk, pushed Argentina’s President to veto the law). Environmental groups initiated an intense era of advocacy to get the Glacier Law back, which they achieved finally in 2010, this time with no presidential veto. The law stands to this day, and in large part due to its prohibition of mining in glacier areas, projects like Pascua Lama, El Pachon, Los Azules, El Altar and others are stalled awaiting the conclusion of Argentina’s Glacier Inventory, which has now been officially published. The inventory is not good new for the miners.

The Center for Human Rights and Environment (CHRE/CEDHA), founded by Picolotti, got right to work to conduct its own glacier inventory and to denounce mining companies and projects that were not abiding by the law. After dozens of reports and international complaints filed against companies like Barrick Gold, Xstrata (now Glencore Xstrata) and McEwen Mining, showing how mining operations were affecting glaciers and permafrost areas, Argentina’s population, and its environmental groups began to deepen their opposition to some these projects. They firmly hold to and defend Argentina’s Glacier Protection law as reason to oppose these mining projects, demanding the application of the law and the publication of the Glacier Inventory.

Now with the Glacier Inventory now public, Argentina’s glacier conflict with mining companies eager to skirt the law, again takes center stage. Miners want to move forward with their projects but the law hinders investments. Environmentalists hold steady in defense of the Glacier Law and for the protection of Argentina’s ice. The current government, run by conservative Mauricio Macri, and  Energy Minister José Aranguren–former Shell Argentina CEO (who holds the reigns of Argentina’s Mining Secretariat), have openly declared their preference to nix the Glacier Law or at least make it more flexible, to  pave the way for mining investments. The macroeconomic circumstances however have not gone the government’s way, with inflation persistently high, the peso falling relative to the dollar, and the investment climate suffering yet again from Argentina’s prolonged and never ceasing political and economic instability. Aranguren,

For the moment, environmentalists have gained the upper hand with the publication of Argentina’s Official Glacier Inventory which clearly delineates where mining can occur and where it cannot, and for projects like El Pachon, Los Azules and  El Altar, the answer is icy clear … not where they are currently sited.

Images of mining impacts to rock glaciers and periglacial areas.

Cerro Amarillo, Mendoza: see on Google Earth at: 35°18’12.23″ S 70°12’24.32″ W
Argentina’s official glacier inventory reveals numerous glaciers in the concession area given to Meryllion Resources. A full glacier impact study would have to take place before this project (which has already been suspended by Mendoza’s Legislature) could move forward.

criminal legal complaint against 5 public officials for not applying the glacier protection law (in Spanish):
https://center-hre.org/wp-content/uploads/fallo-glaciares-Noviembre-2017.pdf

Report on Mining and Periglacial Environments in Argentina
https://center-hre.org/wp-content/uploads/2012/11/El-Ambiente-Periglacial-y-la-Mineria-en-la-Argentina-English.pdf

Report on Impacts to Glaciers by Barrick Gold at Pascua Lama and Veladero
https://center-hre.org/wp-content/uploads/2013/05/Los-Glaciares-de-Barrick-Gold-version-20-mayo-2013-ENGLISH-small.pdf