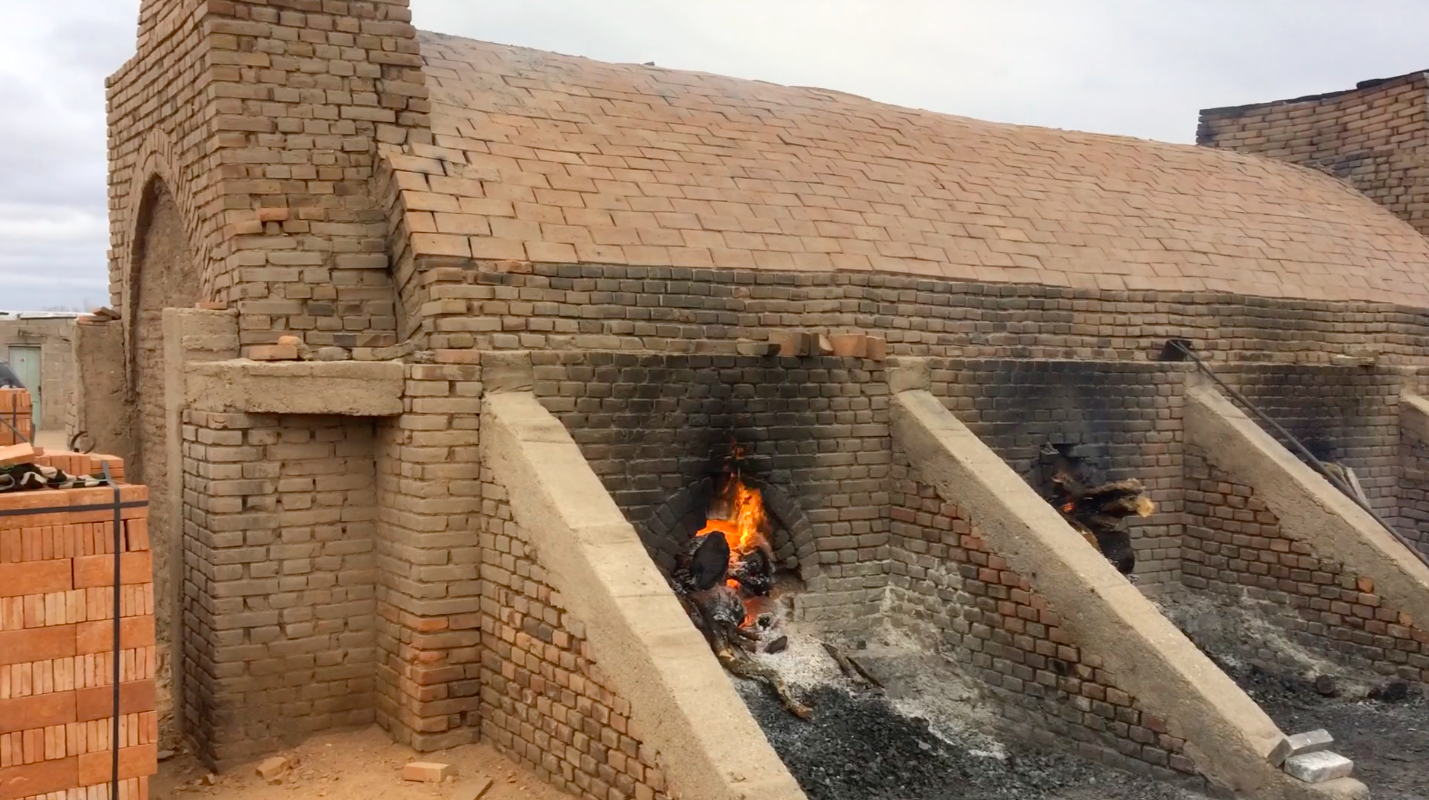 During the visit to Argentina, several site visits took place, including to a large traditional and artesanal facility in the sub urban locality of Florencia Varela, outside of the capital Buenos Aires where some 60+ brick workers produce monthly, millions of solid wood-fired bricks for construction. CHRE also visited with the UOLRA, a labor union outfit that has taken up the task of unifying what are largely informal brick workers across Argentina. UOLRA, which stands for the Argentine Brick Workers Union, works to bring social and labor issues of the brick sector to the forefront, as presently, traditional brick production is largely invisible to most state agencies. Accompanied by UOLRA, CHRE visited a brick production facility that brings together 80 independent small producers of Villa Dolores in Cordoba Province. These small producers, mostly immigrants from Bolivia, are receiving UOLRA guidance to create a cooperative production arrangement that promotes brick maker collaboration in the different stages of brick production (mixing, drying, burning and marketing). UOLRA is also collaborating to help the nascent cooperative to build a new facility which will help market and distribute bricks produced by the 80 independent brick makers. CHRE also met with several large industrial brick producers to get their views on the current state and needs of the brick sector in Argentina.

While there is no official registrar of the number of artesanal brick producers in the country, there is clearly a significant number of traditional kilns across Argentina’s provinces and localities. The majority of these are located in the North Eastern sector of Argentina, with Chaco and Corrientes province housing nearly 44% of traditional kilns. Slightly over 50% of the remainder are distributed in 11 provinces, including Formosa, Santiago del Estero, Mendoza, Entre Ríos, Santa Fe, Buenos Aires, Córdoba, Misiones, Rio Negro, Jujuy and San Juan. According to data compiled by UOLRA,  21 of Argentina’s 24 provinces currently have some type of traditional brick kiln production activity.

The total number of kilns and the number of workers in the sector, many of which are informal in nature, is not formally known, as there is no official inventory at present. Generally, artesanal brick production is a marginal activity that takes place in the urban periphery, where the abundant smoke stacks from inefficient burning is more tolerated. Brick makers have been pushed out of less smoke tolerant urban centers over the years. UOLRA estimates that there are more than 8,000 active kilns in Argentina. The number could be as high as 17,000 according to a report that was compiled but never made public by Argentina’s Mining Secretariat in 2014.

The technology used in traditional brick  preparation and burning generally follows historic practices, utilizing traditional methods that are over a century old. The process consists of extracting clay, molding it by hand into brick form, setting the raw bricks to dry for several days in the sun, then piling the partially hardened bricks in tall stacks of up to 20 or more feet high with bottom openings for burning firewood underneath the pile for days on end. This process generates significant smoke and other emissions that are toxic for workers, for families of workers which generally live on site, for nearby residents, and that directly contribute to climate change. The trend today is to industrialize brick production, forcing small producers in developing countries that are already poor and mostly informal workers, into deeper poverty and marginalization. A modern industrial kiln replaces some 200 small producers and only needs a handful of workers to supervise fully automatic processes. With a growing imperative to address climate change and with a rising intolerance for pollution generating activities, what is certain is that the current and dominant productive model for small artesanal producers is no longer sustainable. This warrants an immediate need from state agencies to intervene to guide the sector towards cleaner, more efficient and more sustainable productive options.

The PAN LAC project, under the guise of the UN’s Environmental Program’s Climate and Clean Air Coalition, which visited Argentina formally for the first time since its inception, is exploring ways to engage the brick sector, searching for ways to use public policy to increase productive efficiency, reduce contamination and increase financial profits for traditional brick producers.

Traditional brick production generally under-utilizes heat from production, directly causing deforestation by requiring more firewood than is otherwise necessary to burn bricks. A single small traditional oven visited in Cordoba Province, for example, can utilize more fire wood to fire a single batch of bricks than an industrial facility which produces many more times its volume.   The traditional brick sector is also prone to systematic violations of labor rights and human rights, of workers, of children and other family members which live on site, and of local inhabitants dealing with contamination from the burning. Many kiln sites in Argentina have been known to have children working in brick production, an issue that has been recently addressed by Argentina’s Labor Ministry.

The introduction of better practices in mixing clay, in redesigning brick kilns to be more enclosed and air tight, the re-utilization of excess heat for brick drying which can achieve desirable results in hours  (instead of laying them out to dry which can take days and depend on ambient conditions), the use of air injection into the burning stage, can increase efficiency multi-fold, lowering fuel costs (firewood) and increasing quality and profits for producers.

Civil Society groups like the UOLRA, work to empower small local producers, focusing on labor rights, encouraging collective relations with owners–which oftentimes rent land to the artesanal producers and have a monopoly in the marketing of their product, and promoting human rights of workers and families involved. The UOLRA is also working with the Ministry of Labor to document child labor and educate brick producers on the need to remove children from production facilities and processes across the country.

Through the PAN LAC, and through its outreach to actors in the brick sector across the continent, the Center for Human Rights and Environment (CHRE) is working to promote cleaner and more sustainable brick production. CHRE is working with various entities of the Argentine national and provincial governments and with actors like UOLRA to tackle the key challenges of the traditional brick sector, and help devise public policies to promote a more sustainable path.

Report and Recommendations from Site Visit (Spanish only):
https://center-hre.org/wp-content/uploads/Informe-de-Visita-y-Recomendaciones-FINAL-Nov-2018.pdf

Resources and Guidance by CHRE on Brick’s Public Policy
https://center-hre.org/?page_id=15172