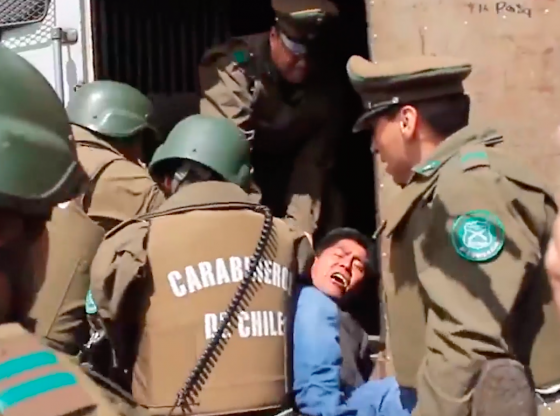 [image: Alberto Curamil, indigenous leader in Chile is detained arbitrarily and on a bogus anonymous accusation]

ENVIRONMENTAL DEFENDERS UNDER ATTACK IN TIMES OF CLIMATE CHANGE

Victims and Experts will testify on the Criminal Persecution of Environmental Defenders for their work including Assaults, Arbitrary Imprisonment, Defamation, and Smear Campaigns

Never before in human history has the Earth’s climate system been so threatened. And never before have environmental defenders been under so much attack. As scientists warn about the climate emergency and the existential threat of irreversible climate change, the Inter-American Commission on Human Rights (IACHR) will hold a hearing on Friday, September 27, in Washington, D.C. about the persecution of environmental defenders in the Americas, the region with the highest rate of attacks. Some of the Earth’s most influential, and yet most vulnerable,environmental defenders will testify about States’ improper manipulation of criminal investigations and prosecutions as a means of undermining and thwarting environmental activism—allowing States and corporations to exploit natural resources unsustainably, degrade the Earth, and perpetuate climate change with impunity.

Environmental defenders, victims of criminalization, and grassroots environmental leaders will gather at the hemisphere’s premier inter-governmental human rights body to share their life stories and to offer their evidence of States attacking and criminalizing their work.

The hearing is open to accredited news media and to the public. In addition, a new landmark report on the criminalization of environmental defenders will be released and a press conference will be held immediately afterwards at the Inter-American Commission on Human Rights.

LIVE Connection to hearing: https://www.youtube.com/channel/UCndV586dZKzWWAV6IySyS5g/live
if problems arise: http://www.oas.org/es/cidh/  – click “173” under the main image for instructions

What:  Thematic Hearing on the Misuse of Criminal Justice Systems to Punish Environmental Defenders
When: Friday, September 27, 2019 from 9:00am – 10:00am
Where:IACHR Headquarters, 1889 F Street, NW, Washington DC. Salon Rubio, OAS