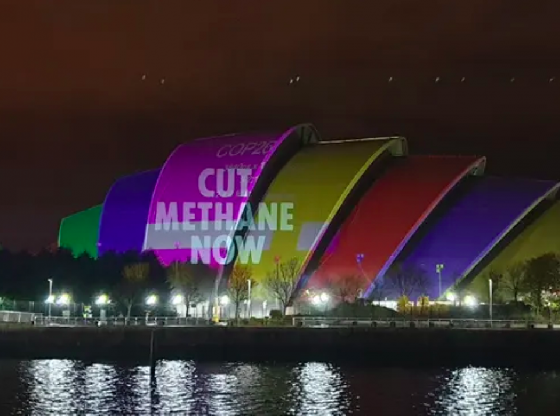 November 14, 2021, Glasgow Scotland – The global Climate Summit held in Glasgow Scotland came to a close this weekend, with underwhelming political ambition to curb CO2 emissions and no agreement to completely phase out fossil fuels, though weak language to “phase down” but not “phase out” coal were agreed. One underlying commitment that did emerge, somewhat under the radar of most delegations, and with only passing inclusion in the political commitment documents released today, is a commitment to reduce methane and non-CO2 gases, which science has revealed, are much more damaging to the climate than CO2.

These COP sideline agreements on methane emissions reductions are a huge push to stop climate change and a noteworthy win that emerged in Glasgow, even it if is not in the concluding texts. If achieved, the methane reductions to be achieved through the methane pledge, represent nearly a half of a degree of avoided warming, a considerable chunk of the 1.5C threshold that scientists say is absolutely necessary to avoid if we want to reduce the most severe impacts of climate change.

Methane is 84 times more potent as a green house gas than CO2, and reducing methane emissions from oil and gas, from landfills and from agricultural waste is the only pathway to keep to 1.5C, says the latest IPCC AR6 Report released last August, to stop global warming and avoid catastrophic tipping points beyond which our climate collapse will simply become irreparable.

One hundred and eight countries signed the Global Methane Pledge before COP26 wrapped up, recognizing that methane is our lowest hanging fruit and one that even brings low to no cost benefits for companies and sectors engage in order to reduce natural gas emissions from their production. There are even significant health benefits to do so as methane gas mixes with other gases to create toxic air that impacts human health.

The Glasgow Pact released today makes only scant mentions of methane and other non-CO2 gases such tropospheric ozone and hydrofluorocarbons—dirty refrigerants—which are not mentioned but implied, but the inclusion of methane and other non-CO2 gases marks a significant step forward for climate negotiators that don’t have much else to show for over two decades of political fights over how to quickly decarbonize our economies.

In the Glasgow Pact, global leaders “[recognize] that limiting global warming to 1.5 °C requires rapid, deep and sustained reductions in global greenhouse gas emissions, including reducing global carbon dioxide emissions by 45 per cent by 2030 relative to the 2010 level and to net zero around mid-century, as well as deep reductions in other greenhouse gases” and [invite] Parties to consider further actions to reduce by 2030 non-carbon dioxide greenhouse gas emissions, including methane”.

Amidst otherwise underwhelming political leadership to tackle our climate emergency with the resolve and aggression it needs, the recognition that gases like methane are not only a big part of our climate problem but also a realistic opportunity to take quick and decisive action to reduce emissions fast, and the Global Methane Pledge negotiated on the sidelines of COP26, is a critical step in the global fight to stop climate change.

link to the Glasgow Pact from COP26

link to the Global Methane Pledge

link to the IPCC AR6 Report

photo credit: The Guardian, showing projections by the climate activist group “Gastivists” which projected “Cut Methane Now” on the COP26 venue in Glasgow.