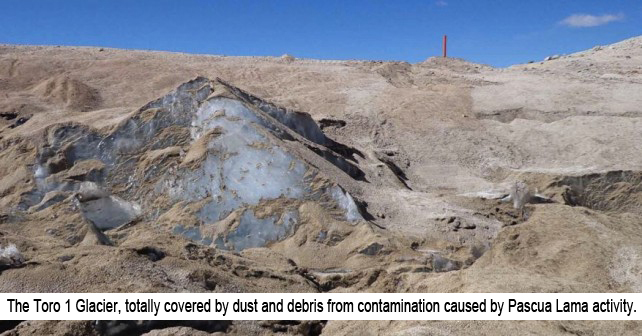 Following recent news that President of Argentina, Mauricio Macri intends to annul Argentina’s Glacier Protection Law to favor mega mining projects, the former Secretary of Environment of Argentina from 2006 to 2008, Romina Picolotti, an acclaimed environmental and human rights activist, asked the Inter-American Commission on Human Rights to hold a special session to discuss glacier vulnerability in the Central Andes and to review the decision of Argentina’s incumbent government to reverse glacier protection stipulations in Argentine law enacted when she was chief of Argentina’s federal environmental agency.

Spurred on by affected communities near Barrick’s Pascua Lama project, Picolotti, when she was the head of Argentina’s federal environmental authority, learned of impacts caused by companies like Barrick Gold, Glencore Xstrata, McEwen Mining and others that were carrying out exploratory and extractive industries in the high Central Andes, in the middle of glacier and permafrost (periglacial environment) areas. These sensitive mountain ecosystems, act as water towers, similar to the wetland functions found in the tropical Andes of countries like Ecuador, Colombia, and others. They provide downstream ecosystems and communities with valuable water year round.

Before the issue gained national attention, Picolotti, still Environment Secretary at the time, quietly ushered a Glacier Protection Law through Congress, getting unanimous approval for the law before the mining sector could figure out what was transpiring. Much to their surprise, the law outrightly banned mining and petroleum operations in glacier and permafrost areas. She also ensured that her Secretariat would be named the Implementing Agency of the law, giving her the much needed jurisdiction that she lacked to intervene mining projects that were harming glacier areas.

Glaciers and periglacial areas are critical water reserves in dry areas of countries like Chile, Argentina, and even Bolivia, Peru and parts of Colombia. Periglacial environments are also found in high mountain ranges throughout the world, in places like the Sierra Nevada of California or the Rocky Mountains of the Central United States. Few people realize there is ice underneath the ground, invisible to the naked eye, but extremely important for local water supply. Mining operations, particularly mega mining, are especially harmful to glacier and periglacial areas due to roads that are introduced through delicate permafrost topsoil, due to exploration and extractive activity, due to the large amount of suspended solids caused by mining activity (dust and debris) and to the general presence of large infrastructure, truck traffic and other industrial activity.

The ex-Environemnt Secretary of Argentina opposed the advancement by Barrick Gold at its Veladero and Pascua Lama projects in San Juan Province, on the border with Chile. It is important to note that while after her departure, those projects received a clean bill of health by pro-mining administrations, Barrick’s Pascua Lama project (which was a transboundary project between Chile and Argentina) was permanently ordered closed in Chile precisely due to irreparable glacier and other environmental impacts caused by the company.

The unanimous approval of Argentina’s Glacier Law in 2008, the only law anywhere on the planet to specifically focus on glacier protection, was greatly resisted by the mining lobby. The president at the time, Cristina Fernandez de Kirchner, after a request by Barrick Gold and by pro-mining provinces, vetoed the Glacier Law, sparking a national debate that exists to date in Argentina about the need to protect glaciers and permafrost environments. Despite the presidential veto (commonly referred to in Argentina as “the Barrick Veto”) and thanks to the massive outcry by Argentina environmental groups and the general population which fought for the return of the Glacier Law, the law was reinstated in 2010, reconstituting the prohibition of mining and petroleum industries in glacier and permafrost areas.

Years later, in 2018, now under the leadership of President Mauricio Macri, and Jose Aranguren (former Shell CEO and proponent of oil and gas exploration in frozen terrain), the government of Argentina is again discussing intensions to annul glacier protection and allow for mining and other industries to advance into the ice.

Picolotti, on behalf of the NGO she founded in 1999, the Center for Human Rights and Environment (CHRE), requested that the Inter American Commission on Human Rights take up the issue of glacier vulnerability, and specifically the intent by the Argentine government to backtrack on strict environmental norms that have been established to protect sensitive ecosystems.

The glacier and periglacial environment expert, Juan Pablo Milana, Diego Segui, legal counsel for one of the most vociferous communities fighting Barrick Gold’s intromission into glacier terrain, and J. Daniel Taillant, author of the many reports CHRE has produced on mining impacts to glaciers and permafrost, have been invited to speak at the Inter-American Commission Hearing. CHRE is now waiting for confirmation of a date for the event.

Mining and the Periglacial Environment in Argentina

Barrick’s Glaciers: Techinical Report on the Impacts to Glaciers and Periglacial Environments by Barrick Gold’s Pascua Lama and Veladero Projects